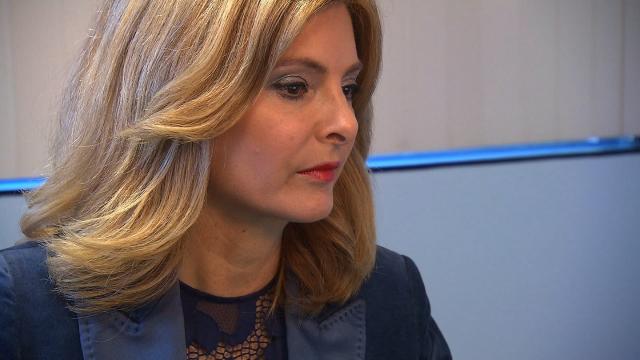 Bloom spoke on his behalf for two days -- but now she says she's done.

"I have resigned as an advisor to Harvey Weinstein," she tweeted on Saturday. "My understanding is that Mr. Weinstein and his board are moving toward an agreement."

Later in the day, a source familiar with the matter confirmed that another Weinstein adviser, Lanny Davis, has also stopped working with him.

Davis, a lawyer who once represented President Bill Clinton, was providing Weinstein with legal and public relations counsel.

Her tweet may be hinting at an impending announcement from the Weinstein Co., the film company he co-founded. Three members of the company's board of directors resigned Friday, according to The New York Times.

Four remaining members of the board said in a statement that he may or may not return to work after an "indefinite leave of absence."

"As Harvey has said, it is important for him to get professional help for the problems he has acknowledged," the statement said. "Next steps will depend on Harvey's therapeutic progress, the outcome of the Board's independent investigation, and Harvey's own personal decisions."

It is unclear what kind of further "agreement," as described by Bloom, could be in the works.

But Bloom's decision to break off her association with Weinstein is a big deal.

Bloom, an attorney and television personality, is nationally known for her women's rights advocacy. She has represented many victims of sexual harassment and assault, including women who lodged allegations against Bill Cosby and Bill O'Reilly.

That's why there was so much curiosity -- and mockery -- of her decision to work with Weinstein.

Even Bloom's mother, the attorney Gloria Allred, came out publicly and said she would have declined the chance to represent Weinstein.

"But that is not a statement of criticism of my daughter. That is just a statement of whom my law firm is. She has a separate law firm," Allred said on "CNN Tonight" Friday.

Allred added: "Weinstein is very fortunate to have her as his lawyer and adviser."

During the 48 hours she publicly represented Weinstein, Bloom went to great pains to say that she wasn't serving as Weinstein's legal counsel.

But in TV appearances and on Twitter, she said she was one of his advisers, acting as a sort of counselor about workplace behavior.

"He has demons that he needs to slay, and I'm working with him on that," Bloom told CNNMoney's Richard Quest on Thursday.

That interview came a few hours after The New York Times published its detailed story about Weinstein's past settlements with women who accused him of harassment.

Bloom said in the interview that Weinstein came to her "about a year ago." At the time, reporters were already looking into the allegations against Weinstein, though it is unclear how much he knew about the journalistic investigations.

Bloom stood up for Weinstein by arguing that, unlike former Fox News CEO Roger Ailes for instance, Weinstein was remorseful.

"When Harvey came to me about a year ago, to talk to him about this, he said immediately: 'I'm not going to attack any of the women, we're going to do this differently, I'm willing to acknowledge I've made mistakes. How many top CEOs do you hear, in this kind of situation, say that?" Bloom told Quest. "And I've had very frank and honest conversations with him about, 'Harvey -- your behavior needs to improve', and he acknowledges that."

Bloom's involvement with the matter received widespread skepticism because she had other business dealings with Weinstein's company.

In March the company acquired the TV rights to her book "Suspicion Nation" and said the book would be used as source material for a TV series and movie.

According to her own timeline, that means they started having conversations about his behavior about six months before the book deal was announced.

While working together on the project, "he has always been respectful toward me," Bloom said in a statement on Thursday.

She continued to stick up for Weinstein on Friday, including in interviews on ABC's "GMA" and HLN's "Across America."

Bloom said she'd be conducting a review of the Weinstein Co.'s HR policies and making recommendations.

Presumably that review will no longer take place.

Bloom did not respond to an interview request on Saturday.