Starting at 2 p.m. in City Plaza, First Night will feature a DIY Festival at the N.C. Museum of History, the N.C. Museum of Natural Sciences and outdoors on the Bicentennial Plaza with workshops and demonstrations from professional artists and performers. Adults and children can create time capsules, practice hand lettering and make rhythm instruments. Art Putt, a miniature golf course and interactive art installation, will start on Fayetteville Street with illuminated art by local neon artist Nate Sheaffer.

At 5:30 p.m., performances will begin on the City Plaza Main Stage with music from Cane Mill Road and the Triangle Youth Jazz Ensemble. Later into the night, there will be more than 30 other indoor and outdoor performances in venues across downtown Raleigh. 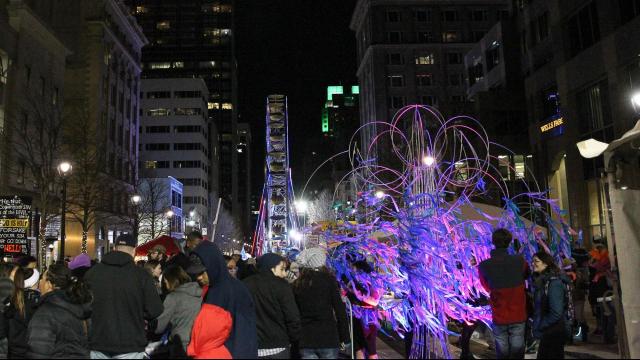 The "Fantastical First Night Ferris Wheel" will return this year along with a new “F-5” giant swinging pendulum that will light up Fayetteville St.

Both amusements will open to the public at 2:00 pm.

Tickets for First Night are now on sale online and at Harris Teeter & CVS pharmacies.