LINDSAY'S GIFT: Saving a life is what you're supposed to do 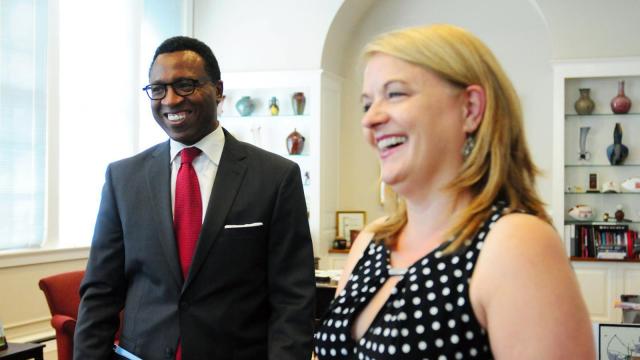 Howell, who’d spent 10 years as N.C. State University’s liaison with the General Assembly, told his friend Andy Willis that Friday that he didn’t feel well and suspected his kidneys were malfunctioning.

Willis, the chief of staff at UNC Health Care, immediately put Howell in touch with Dr. Ronald Falk, Chair of the Department of Medicine at UNC, who had seen Howell before. Howell drove himself directly to the hospital in Chapel Hill for a blood test – and Dr. Falk soon had terrible news.

“He said, ‘Kevin, your kidneys have failed – both of them,’” Howell said. “From that moment, October 30th, my life changed.”

“Because kidney disease is a silent disease, he didn’t know how sick he had gotten,” said Dr. Falk. Howell’s creatinine level – a measure of kidney function – was “bizarrely high.”

Howell was admitted to the hospital. Nurses came to visit because they’d never seen a living patient with a creatinine score so high.

Falk advised him to start looking for a kidney donor. He immediately began having four-hour dialysis sessions – and wondering whether he would see his teen-aged daughters become young women.

QUEST FOR A DONOR

At a staff meeting the following Monday at Holladay Hall – N.C. State’s main administrative building – the staff was told Kevin Howell was in the hospital, he needed a kidney, and the donor needed to have O-positive blood. Everyone was shocked. At least 40 people made inquiries about how to get screened.

Woodson’s assistant, Lindsay Recchie, was likewise shocked. Kevin worked out. He ate right and seemed one of the healthiest people she knew.

She went straight to her husband Ralph’s office nearby to discuss it. Though she had signed the organ-donor box on her driver’s license, she’d never heard of live donors giving organs.

“I didn’t even know my blood type at this point,” she said.

Recchie kept stewing on Kevin’s situation. Though normally upbeat, when he returned to work, he didn’t look good and seemed down.

Then, on Friday, November 13, terrorists struck in several attacks in Paris.

“That weekend, I just kept thinking about all the evil in the world, and Kevin,” Recchie said, “and I felt like I had to do something to make the world a better place.”

She talked with her husband, then checked her medical records online at UNC Rex Hospital in Raleigh – and discovered she was O-positive.

“When I saw that I was O-positive, I just felt a feeling. And I was like, ‘This is going to work. This is what I’m supposed to do,’” she said. “I just knew – I just had a feeling that it was meant to be when I saw the ‘O-positive.’”

She then contacted a transplant coordinator at UNC Chapel Hill. She answered a set of five questions over the phone. Then a much longer questionnaire arrived in the mail with extensive inquiries about her medical and family history.

She went to UNC for a blood test the Monday after Thanksgiving.

“Morning – cross your fingers,” she texted Howell. “I’m waiting to get my blood drawn for you…. The ladies in the lab are praying for you.”

At 11:30 the next morning, the transplant coordinator called: She was a perfect match.

When he heard, Kevin texted her back: “Lindsay, thank you for saving my life. What you are doing for me brings tears to my eyes. Know that I am forever grateful.”

At a Christmas parade soon afterward in New Bern, Recchie’s daughter Lilly caught a “Donate Life” keychain that was tossed from a float.

“Have You Said Yes to Organ Donation?” the keychain asked.

Again, it seemed meant to be. But not before more tests.

In December, Recchie had three full days of testing – and a battery of questions. Could she take three weeks off from work to recuperate? Who would take care of her during her recovery? And a psychological exam: How would she feel if Kevin died on the operating table, or the transplant failed after she’d given up a vital organ?

At each step, she was asked whether she wanted to continue. “As it became more clear that she was potentially a perfect match, her commitment never wavered,” said Woodson.

It was easier to sacrifice an organ knowing who would get it, Recchie said.

“Knowing Kevin, yes,” she said. “Twenty-two people die every day waiting for kidneys, and I couldn’t let Kevin be one of those.

“I said, ‘Well at least I’d know I tried and I did everything I could.’ But if I hadn’t tried, that’s what I couldn’t live with.”

Howell, meanwhile, was still enduring four hours of dialysis three days a week – and they both felt a growing sense of urgency.

The morning of the surgeries – Feb. 2 – Kevin and Lindsay prayed together with Kevin’s wife, Aleta, his pastor Dr. Dumas Harshaw, Ralph, the surgeon and the nurse.

“There was a very real possibility he would die on the table,” she said.

“The power of prayer – it’s so true,” said Kevin. “I look at life differently now. And none of us know how long we have left to live.

In addition to spiritual moments, there were humorous ones.

Leading up to the surgery, “He would come in in the morning and say, ‘Are you taking care of my kidney?’” Lindsay said.

“After the surgery, he would come into work and I’d say, ‘Are you taking care of my kidney?’”

Recchie – a native of Ohio – also asks Howell occasionally whether he’s started rooting for the Ohio State Buckeyes yet. (That hasn’t happened.)

But well beyond athletic rivalries, both rave about the quality of care they received.

“The doctors and the care we received at UNC Chapel Hill were phenomenal,” said Howell, now the Senior Vice President of External Affairs for the UNC system. “Both of us are living proof of that.”

Howell, NC State’s first black student body president as an undergraduate, was dedicated to his university before his transplant. But that devotion is even deeper now.

“It’s family – everybody here is family. I witnessed that more during my sickness than ever before,” he said. “It’s been remarkable. Some things that happen to you I think are just planted in your heart forever.

“What Lindsay gave me was a gift … a gift I never expected to receive but I’m forever grateful for,” he said. “Because of the gift, I can look forward.”

A LIFE, AN AWARD

On Tuesday, Lindsay Recchie received the Governor’s Award for Excellence – the highest award a state employee can receive.

“Now this is sacrifice,” declared Gov. Pat McCrory. “She donated a kidney to her fellow employee. Her bravery and selflessness are an inspiration to everyone who works with her.”

Lindsay and Kevin ask others to consider donating organs to people in desperate circumstances.

“We want them to think about it the next time they hear someone needs help,” she said. Physically, she said, “I feel no different.”

“There are just not enough kidneys,” he said. “It’s the best gift you can give, by far and away.”