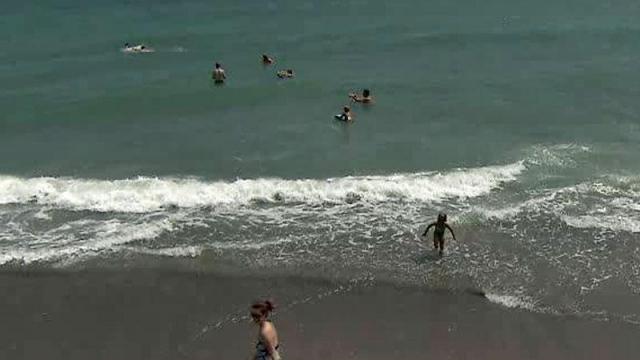 Raleigh, N.C. — North Carolina beaches had the seventh-cleanest waters in the U.S. last year, when beach closings and health advisories across the country leaped to their second-highest level in more than two decades, according to an annual report from an environmental advocacy group released Wednesday.

Four percent of the samples taken from 240 beaches stretching along 320 miles of the North Carolina coast exceeded bacteria safety standards, according to the NRDC report. Stormwater runoff and wildlife waste contributed to the contamination a majority of the time.

Two Dare County beaches had the highest rate of contaminated water samples: the sound side of Jockey's Ridge, at 22 percent, and Colington Harbour Swimming Beach, at 17 percent.

Those levels prompted beach closings or advisories for 84 days at both beaches, according to the report.

Nationally, contaminated water prompted 24,091 days of beach closings or advisories, up 29 percent from a year earlier. The NRDC attributed that rise to the effects of the BP oil spill in the Gulf of Mexico, while bacteria caused by stormwater runoff remained a large factor.

The Great Lakes region had the most days with contaminated water, at 15 percent. Water along the Southeast, New York-New Jersey and Delmarva regions had the fewest contaminated days, at 4, 5 and 6 percent respectively.

Ten beaches were noted as "repeat offenders" for having water samples that exceeded health standards more than 25 percent of the time between 2006 and 2010. Those beaches included three in California, two in Wisconsin and one each in Florida, Illinois and New Jersey, Ohio and Texas.