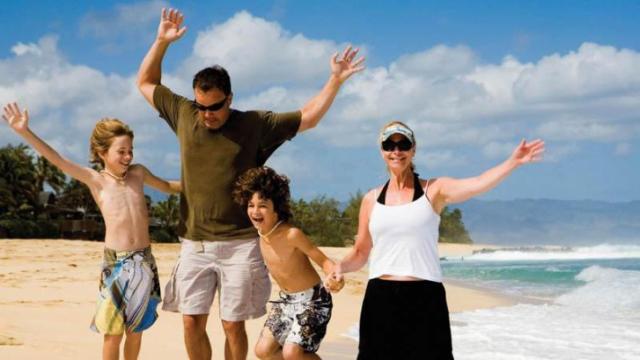 As an adult, you may have visited dozens of exotic locations. But as a parent, the same locale may hold a different appeal for your children and a chance to see a familiar destination from a new perspective.

Giving children a voice in the vacation choice allows them to become excited about the upcoming trip and the activities they can enjoy.

Parents need to plan appropriately for different ages and recognize that time of year and seasons are important as well. Children learn in different ways and will remember things like new food or personal interactions.

Guided tours can be replaced by casual visits or interactive activities, and sightseeing can be limited to 90 minutes or less. Sometimes, time apart may be welcome.

Here are some destinations the whole family can enjoy:

More than 30 islands have sunny beach spots and sparkling water. Sample ska and reggae music in Jamaica and visit new water parks and all-inclusive resorts with specialized offerings for children. The oldest city of the new world is Santo Domingo in the Dominican Republic.

Try underwater sightseeing by scuba diving or snorkeling brilliant-colored reefs and seeing exotic fish in the Cayman Islands and Grenada. Sail or ferry between the 50-plus British Virgin Islands. Tour Puerto Rico's 28,000-acre tropical rain forest, El Yunque, or travel back to the 17th-century on the historic city streets in Bermuda.

The continent is a treasure chest of history, art, architecture and new cultures. Keep the pace slower for children to get used to new languages, customs and cities.

London and the United Kingdom are good first visit choices. Families will enjoy the Tower of London and the British Crown Jewels. Visit London Eye, the largest ferris wheel in Europe, Buckingham Palace and Westminster Abbey.

Italy offers Rome and the Colosseum, an ancient-day sports arena that held up to 73,000 spectators who came to watch chariot races or gladiators fight to their death. See the Pantheon, Michelangelo's masterpieces in St. Peter's Basilica and the Vatican. Visit the Baths of Caracalla in Aventino, where Romans washed, bathed and relaxed in the sauna. Find out how the city of Pompeii was buried in volcanic ash. Relax on gondola boat rides in Venice, learn pasta making in a Tuscan kitchen and visit a local farm for olive oil and limoncello tastings.

Spain has stately cathedrals and artwork by Picasso, Velazquez and Goya in Madrid. Fairytale castles, flamenco dancing and bull rings can be combined with a trip to Barcelona, the second largest city in the country, which has its own culture and language, Catalan.

In France, climb 1,710 steps to the top of the Eiffel Tower, see the Mona Lisa and the Louvre's glass pyramid, or travel on the TGV, a bullet train that zips up to 200 mph. Pretend to be a Tour de France racer on one of many countryside bicycle tours. Visit the 2,000-year-old Pont du Gard three-level bridge and aqueduct, both constructed without the use of mortar.

Raft along the Colorado River to fully appreciate the magnitude of the Grand Canyon. Stop by the Badlands of North Dakota, named by the Sioux Indians for its rugged terrain and lack of water. Visit Mount Rushmore's 60-foot-tall heads of Washington, Jefferson, Lincoln and Roosevelt, and travel down the road to see Crazy Horse, a Lakota Indian mountain sculpture started in 1948, expected to be the world's largest when finished.

Relive the Wild West and visit the Arizona desert and Lake Powell, the United State's second-largest man-made lake, with 2,000 miles of shoreline and 96 canyons on the Utah and Arizona borders.

Spectacular views of six major tropical islands, the world's tallest sea mountain with two active volcanoes, plantation tours, luaus and the wettest spot on earth are all available in the 50th state.

Swim in private saltwater lagoons and go to a luau with fire dances and native foods. See the molten lava of Kilauea's active volcano on the Big Island and the black, white and green sand along the island's 260-plus miles of coastline. Visit Oahu's Dole Plantation, site of the world's largest pineapple garden maze, and sample fresh pineapple.

Watch the North Shore's world-class surfing, and then try it in calmer waters. Visit the Panawea tropical rainforest zoo, home to 80-plus species. Ride Maui's 6-mile-long Sugar Cane Train at the base of the West Maui Mountains, and see the nation's largest collection of live coral at the Maui Ocean Center. Cool off viewing the wettest place on earth – Mount Waialeale's roaring waterfalls on Kauai.

From sparkling beaches to jutting mountains, the Southeast offers theme parks and more. Visit Walt Disney World in Orlando, stop by Universal Studios and learn about marine life at Sea World. See the Kennedy Space Center, the Astronaut Hall of Fame, and stop for lunch with an astronaut.

Head to Florida Everglades National Park to a campsite, accessible only by boat, and see crocodiles, panthers and manatees. The Gulf Islands National Seashore, located in Mississippi and Florida, has native barrier islands. Horse farms abound from Appalachia to Kentucky. Tour the Great Smoky Mountains National Park, on the border of North Carolina and Tennessee, and see the Salamander Capital of the World, boasting 30 different species.