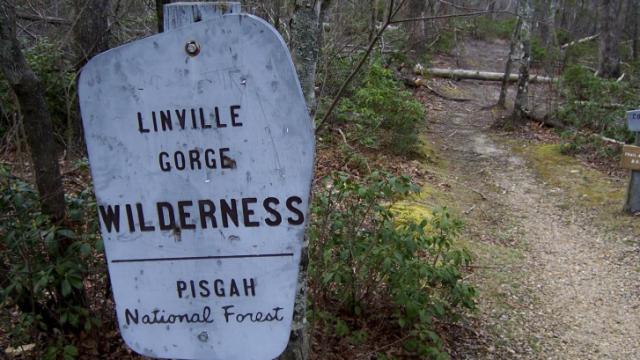 Linville Falls, N.C. — The Linville River cuts an impressive swath across Avery and Burke counties. Rushing from Grandfather Mountain to Lake James, the river has carved a valley into the Blue Ridge Mountains so  ruggedly beautiful that it has been dubbed the "Grand Canyon of the East."

The 12-mile-long Linville Gorge features an assortment of rock formations that rise steeply from the river valley into dramatic outcroppings, such as Table Rock, Hawksbill and Sitting Bear. The area was considered sacred by the Cherokees and its pristine condition has been maintained for the past 50-plus years by its inclusion in the national wilderness system.

Taking U.S. Highway 221 north from Interstate 40 brings you up along the west rim of Linville Gorge. Follow signs to an information center on a gravel road off the highway. About four miles down the gravel road is Wiseman's View, which offers a spectacular overlook to the gorge and could be considered the "best view in North Carolina."

Hiking in the gorge is best done on spring weekdays, when mild temperatures and no crowds combine for an enjoyable experience. When I went with my family recently, we saw a few people in cars but no one on the Conley Cove trail we hiked. The gorge can get pretty crowded on the weekends and during the summer.

Be sure to take plenty of water and a compass or Global-Positioning Satellite unit for any trek because the trails are minimally marked. A four-wheel-drive vehicle also comes in handy to travel on the gravel roads to the trailheads.

Above all, never hike alone. Although a crush of people ruins the wilderness experience, the company of a fellow hiker -- in this case, my family -- makes the hike much more enjoyable and safer.

The Conley Cove trail is among the less strenuous of the 15 trails that traverse Linville Gorge. It allows you to descend down into the valley in an hour or so and see the beautiful Linville River. You can often spot peregrine falcons on the hunt and see flora there, like mountain golden heather, that grow nowhere else on Earth.

Linville Gorge offers a chance to reconnect to North Carolina's natural beauty and marvel at the sculpting power of rushing water.