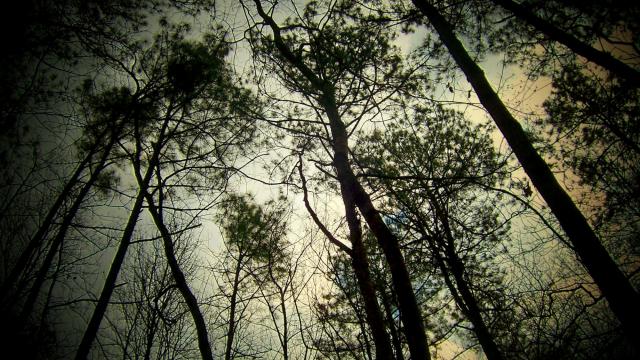 The first thing I noticed about Raven Rock State Park was the quiet. You could hear the wind whispering through the pines and the distant roar of the river but little else on this chilly winter morning. The second thing I noticed was the mountain-like feel of the trail. During several turns I felt like I was hiking one of the trails at Stone Mountain near Elkin.

I love this rustic park. It’s only 45 minutes from my home in Cary. You really get that wilderness feel here. We only met a few hikers on the trail not counting the family of deer roaming around Little Creek. It was fun to dip down out of the forest to the Cape Fear River below. I counted more than 100 steps – a surefire test for my big toe on rehab following surgery in early January. I passed with flying colors. The massive rock overhang below is a magnet for hikers. Ravens used to roost in the ledges here. If you’re lucky you might see a bald eagle soaring above the water.

The last time I was here was when I did a news story on a UNC-Wilmington team canoeing the river as part of a water quality documentary. That was during warmer weather. There were no mosquitoes this time. But I do want to come back soon especially when the wildflowers start blooming. These include bloodroot and Soloman’s seal. I want to come back and hear the tree frogs chanting as well. There’s plenty of room to romp. The park’s acreage is pegged at 4,667.

Major road improvements into the park near Lillington are underway. In fact, the park will be closed through February 25. After that, do yourself a favor and plunge into the primitive and pristine by visiting Raven Rock State Park nine miles west of Lillington off US 421. Just keep an eye out for the brown signs