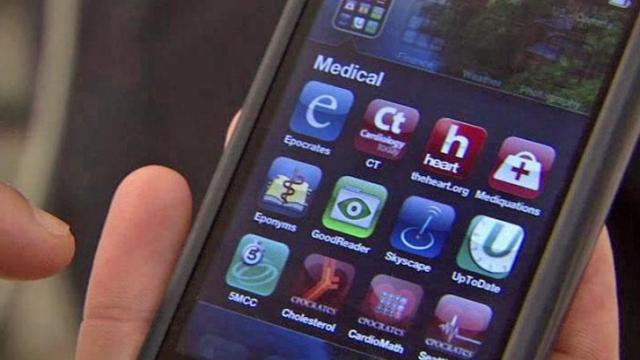 Michelle Fuquay, of Raleigh, teaches hot yoga, loves health food and is quick to latch on to smart phone apps to help her reach her diet and fitness goals.

Her favorite health app, called "Lose It," it calculates the calories in different meal options.

If she has chicken salad with baby spinach for lunch, for example, the app calculates that she can have 973 more calories during the day, Fuquay said.

Then, she can factor in exercise.

Even some doctors are using smart phone health and weight loss apps.

Madanick uses an app called "My Fitness Pal," which counts the calories in restaurant items – a McDonald's cheeseburger, for example, which weighs in at 500 calories.

It also connects him to a dieter's forum, where he can share stories of his fitness struggles and successes. He appreciates having the support from other dieters.

"It's much more difficult to do it on your own than it is to do in groups," Madanick said.

An app called "Instant Heart Rate" has a heart-rate monitor function, which can measure heart rate when a person places a finger on the phone's camera lens.

Dr. J. Larry Klein, a UNC cardiologist, compared the app's measurements to the industrial heart rate monitor in the UNC cardiac care unit. When the super sensitive industrial version gave a reading of 86, he said, the smart phone read "in the 85 to 90 range."

"I think it's quite good," Klein said.

He said he uses several free apps daily in his clinical practice, such as one that determines a person's risk of heart disease.

Mobile app users can usually test an app before paying for it, and many people find reviews for how well a particular app works online or in weight loss discussion groups.