Scary surgeries made easier for kids at UNC Hospitals 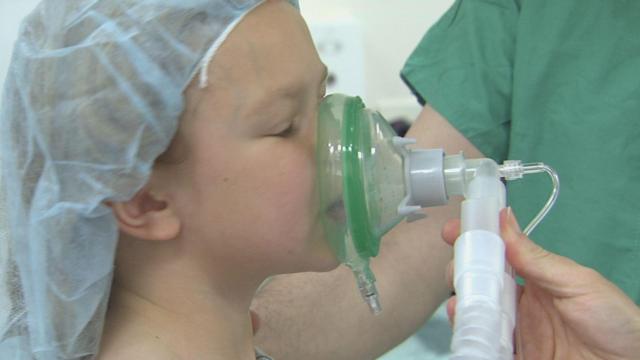 Chapel Hill, N.C. — Surgery can be scary business for anyone, but imagine it through a child's eyes.

“Surgery is a scary thing anyway, for any kid. I don't care how old you are,” said Stacey Fox, whose 6-year-old daughter, Jordan Fox, has undergone several surgeries for a blockage in the lymphatic vessels in her right arm.

Even though Jordan has experienced several surgeries since she was a baby, the staff tries to keep her mind off the usual anxieties.

After goodbye kisses, Jordan took a wagon ride past colorful murals and into the operating room.

“(Children are) focused on the fact that someone might come at them with a needle. They've learned that white coats go along with pain,” said Dr. William Adamson, a UNC pediatric surgeon. "There's nobody loading syringes. There's nobody clanging instruments. Everybody stops for that brief period of time where we're trying to distract the child so they can go off to sleep.”

The children also will no longer see adult patients sharing the same halls or nearby rooms.

“You can even see it in their staff. They seem to have picked their staff to be very kid-friendly,” said Steve Fox, Jordan’s father.

The six-bed pediatric surgery unit consists of nine pediatric anesthesiologists, five general surgeons and other specialists, all trained to work with children.