Chicken pox can return in adulthood 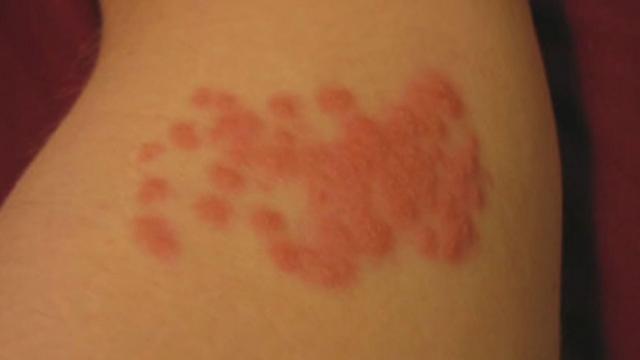 Raleigh, N.C. — Childhood chicken pox can return later in life as a painful rash called shingles. In those over 60, a vaccine prevents the rash, but it is not recommended for those who are younger.

Eleven years ago, then-34-year-old Denise Vaughn began to feel a rash emerging on her torso.

"They turned into sores, like the chicken pox do," Vaughn said.

And they were painful. "It's from the inside, burning and radiating out," she said.

The chicken pox virus that had gone dormant during Vaughn's childhood had returned as shingles.

Adults 60 years and older are at highest risk for shingles, and the vaccine can cut their risk in half.

Younger people like Vaughn can get shingles because of a weakened immune system.

Vaughn remembered she was just getting over the flu before the rash appeared.

Treatment is aimed at relieving the pain with lotions and medications. Anti-viral drugs are used to shorten the duration of lesions and decrease the risk of post-herpetic neuralgia – a condition Casey explained as "pain that lasts well beyond the disappearance of the rash."

Vaughn was out of work for about 10 days when she had shingles, and her skin didn't clear up for another 10 days.

Even though she's had shingles, it could come back, and she's still not old enough for the vaccine.

"It's not that people under 60 can't get the vaccine. It just hasn't been studied, and so there's some risk," Casey said.

Shingles is passed by direct skin contact or through the air until the blisters crust over.

Someone with shingles can only cause chicken pox in people who have not yet had the illness, and there is also a vaccine for chicken pox.