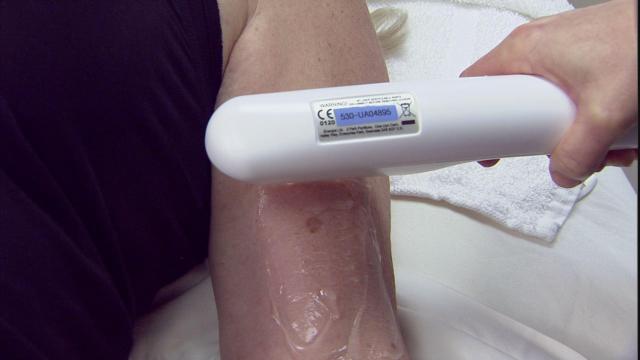 Many people love to soak up the sun, even though they know that too much sun can damage their skin. The side effects might not be apparent now, but excessive exposure can take a toll later in life making people look older than they are.

The obvious threat to skin is too much sun. But aside from genetics, there's also smoking, excessive alcohol and junk-food diets. They all contribute to wrinkles and discoloration, but there are ways to help turn back the clock.

“Over the years, being in the sun, I was experiencing things from the dermatologists, such as eczema, seboria,” said Kaye McCaskill, who had many areas with darkened pigment or sun spots.

“She had a lot of these actually on her face along with broken capillaries and a lot of redness,” said Esthetician Sigrid Yorke.

Yorke uses IPL, or intense pulsed light therapy, to treat many discolored areas. Using a cool gel barrier, she zaps the upper layers of the skin. The spots get darker at first.

“But within a few days it will start to slough off the surface with normal cell proliferation,” she said.

“And the results are visible much quicker than with a chemical peel and some of those other surfacing modalities,” he said.

Lynn Poole said she tried topical creams to treat the lines around her lips.

“But they're not really very effective, so I'm very excited about using fraxel,” she said.

She's had one of four treatments and it's just a few days of healing after each treatment.

“It feels as if you've had too much sun and there is some redness,” she said.

Some simple prescription medications can help some patients.

“Retinoids are good at turning over the more superficial layers of the skin, reversing many of the changes that also occur due to sun damage,” Ray said.

For more significant sun damage, Ray also prescribes Retin A which is known mostly as an acne treatment. However, it can also help clear up the skin and get rid of some age spots and improve the texture of the skin.

Skin fillers, such as Botox and Restylane, are temporary and last up to eight months, depending on the person. There is a new popular skin filler product called Disport, which was cleared by the Food and Drug Administration a year ago. It's approved for use on the skin between the eyes, but many doctors use it off label for other areas of the face as well.