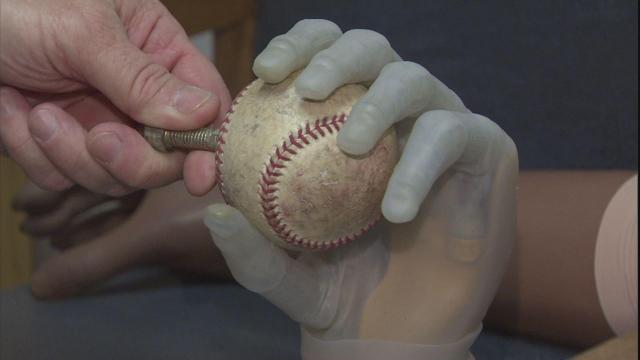 Raleigh, N.C. — With more veterans returning home as amputees, demand for prosthetics is up, and high-tech advances are helping improve the grip of the artificial limbs.

Ebele Achone lost part of her right arm in a domestic assault six years ago. A prosthesis gave her a second hand to pinch and grip, but it has limitations.

"You can hold bigger objects, but with little things, they can just slip off," Achone said.

Achone came to Hangar Prosthetics in Raleigh to check out a possible new improvement in prosthetics, called the i-Limb.

"It grips around an object, and it complies to the shape," said Bill Limehouse, an upper-extremities prosthetics specialist with Hangar Prosthetics.

The iLimb works similarly to Achone's current prosthetic in some ways – they both use contacts on certain arm muscles – but she prefers the new technology.

"This works smoother, and this works with more. It's more functional," she said.

Instead of one motor for pinching, the iLimb has five motors, one in each finger.

"It's the most modern technology for upper-limb prosthetics that we've seen in a while," Limehouse said.

Several veterans use the iLimb. Unlike the old prosthetic hands, these new ones can be twisted for the best angle, and all the fingers can move at once or just the thumb by itself.

"It's very exciting to see what's going to come out in the future," Sgt. Juan Arrendondo, who has a prosthetic, said.

The iLimb device costs about $18,000. Some insurance companies cover it, but Medicare does not.

Achone recently graduated from East Carolina University with a degree in hospital-information management. She said the improved prosthesis will help her function better in the kind of job she wants.