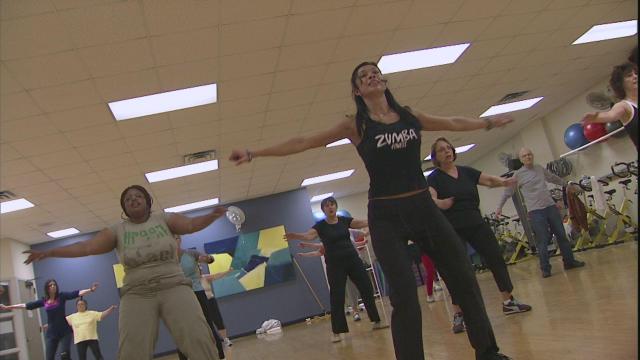 Raleigh, N.C. — The newest aerobic craze has a Latin beat. It's called Zumba. The word is Colombian slang for "to buzz" or "to move fast like a bee."

The classes began in Miami eight years ago as an alternative to the same old exercise routines. Now the mix of aerobics with salsa, mambo and meringue has spread to Rex Wellness Center and several other Triangle fitness clubs.

Yasmin Taylor was born in Costa Rica. She grew up with the Latin beat and knew all the Latin moves. In essence, she was born to teach Zumba.

"It's dance but it's mixed with ... working the biceps, doing lower and upper body," Taylor described.

Zumba works every part of the body.

Meryl Freeman first sampled the class to strengthen her back muscles.

"Two and a half years ago, I had major spinal surgery and this has been part of my recovery," she said. "It's been very helpful in core strengthening in a very functional way."

Freeman also enjoys the variety in Zumba. "Zumba to me is a lot of fun. It's exciting, there's a lot of energy in the class and I never get bored, so I'm going to continue doing it," she said.

Taylor said Zumba appeals to students with a range of abilities. Though everyone moves to the same beat, students can go at their own pace.

"It's good because you don't have to be a dancer," she said. "You just need have a good attitude."
SUGGEST A CORRECTION