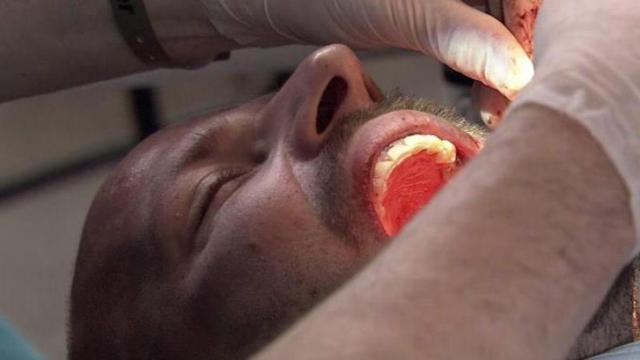 New York — Regular check-ups at the dentist's office can help diagnose new cases of diabetes and people at high risk of the disease, researchers at Columbia University in New York found.

Oral health can offer clues to diseases elsewhere in the body. Studies have also found that roughly 70 percent of Americans visit a dentist at least once a year, so researchers figured dental visits would be a good opportunity to look for diabetes.

Dental assistant Adair Sheffer was diagnosed a high risk of diabetes during a recent study at Columbia's College of Dental Medicine.

"I was shocked, because like a week before, I went to my physician and did a thorough examination, and everything was fine," Sheffer said.

Of the 500 people examined in the Columbia study, more than one third had diabetes or pre-diabetes.

Researchers identified most cases by looking at the number of missing teeth in a patient's mouth and the amount of space between the gums and roots of teeth.

Research has shown that diabetes often makes gum disease worse, and gum disease can also make it harder for diabetics to control their blood sugar. As well, mounting evidence shows that poor oral health might be connected to a higher risk of other serious health problems, including heart disease and stroke.

"The dentist may be the first health care provider that sees these changes in the mouth," said Dr. Evanthia Lalla, an associate professor with Columbia's dentistry college.

Those early diagnoses can give patients such as Sheffer more time to turn things around. She has started eating sugar-free foods and exercising regularly.

"Now I can prevent becoming a diabetic person if I keep up my exercise and my diet," Sheffer said.