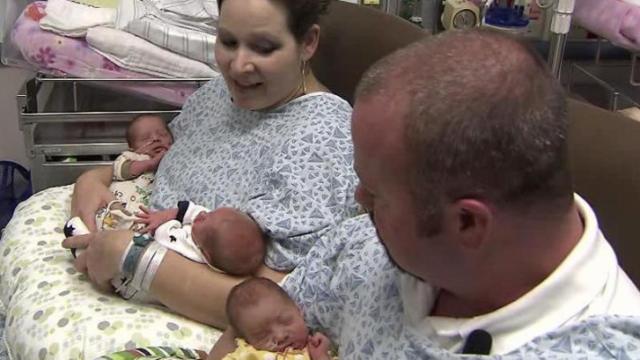 Durham, N.C. — A Raleigh woman who was preparing for twins gave birth to quadruplets earlier this month at Duke University Hospital in Durham.

Sherri and David Norris say the four newborns – two boys and two girls – are a blessing and that they can't wait to take them home. The babies were in a special care nursery Thursday, where they're being fed through a tube until they get bigger.

The couple underwent in vitro fertilization and Sherri Norris had two embryos implanted in her uterus. But, as the pregnancy progressed, an ultrasound revealed that the twins they were expecting had doubled. Two embryos became four fetuses.

The first-time mom and her husband are diving head first into a full house, but they say they're excited for the challenge of raising four infants at the same time.

"It's a journey we're willing to take," David Norris said. "What a blessing."

"My mom is going to be a big help. My sister lives close to us as well, but I mean, I guess you just figure it out," Sherri Norris said. "They're my first, so I don't have anything to compare it to."

They're hoping to bring babies Logan, Bella, Jase and Addison home to their 11-year-old big brother – David Norris' son from a previous marriage – and a house full of baby stuff in June. The Norrises said family, friends and church members helped them get everything they need – four car seats, four cribs, four high chairs, four of everything.

In the meantime, the couple is focused on what's most important.

"They're so sweet. We've been blessed with healthy babies," Sherri Norris said.