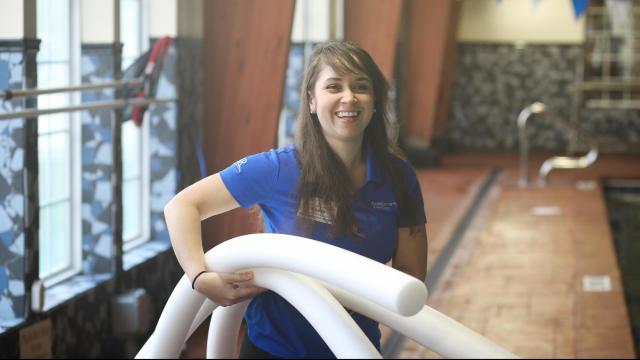 Last year, 17 agencies benefited from the charity's donations — a true example of people giving back to the community in which they live.

Volunteerism and charity work are pillars of the Pittsboro-based life plan community. Galloway Ridge works with several organizations to champion their missions. Whether it's providing finances, resources or time, Galloway Ridge epitomizes the spirit of giving with upwards of 30,000 hours per year of resident volunteer hours.

The Chatham Outreach Alliance (CORA) is a not-for-profit food pantry in Chatham County that seeks to end hunger in its community. Its annual Empty Bowls fundraiser is one way it accomplishes this.

"We recently held the CORA Empty Bowls program here at Galloway Ridge. We provided the space and the staff. CORA didn't have to use any finances to rent a hall and were able to raise $20,000-plus from the event that night," said Scott Richardson, senior director of resident and community engagement at Galloway Ridge.

Richardson noted the high level of community engagement from many Galloway Ridge residents. One such resident is Bob Holton, who has lived at Galloway for seven years with his wife, Sandy.

"I think a lot of people in our age group have a legacy of volunteerism," he said. "Sandy has been volunteering for 50-some years. When you come to a life plan community like Galloway Ridge, you don't have to clean [the] gutters, change this or repair that, you have more time on your hands."

The Holtons choose to spend much of their retired time overseeing charitable operations within Galloway Ridge, leading Salvation Army bell ringers during the holidays and coming up with new ways to serve.

Last summer Galloway Ridge partnered with the local Boys & Girls Club of America to create a weekly summer camp for roughly a dozen children each week for three weeks — 36 children total from the Siler City area — that would give them access to a pool, activities and fun. Children got to swim, paint and race Pinewood Derby cars, learn how to make tacos and parfaits, and visit the animals at Fearrington Village. Holton said kids even got to go out on a boat on Jordan Lake.

"The kids had an opportunity to steer the boat and they just went bonkers at that opportunity," laughed Holton at the memory. "Living at a place like Galloway Ridge is not sitting in a rocking chair — we are very active. It's very nice to have people who want to be helped or need to be helped that you can give back to."

Galloway Ridge doesn't just give back to people outside of its hallowed halls though, making sure to lend the same charity and support to those who live and work within its walls.

The Galloway Ridge Benevolent Care Fund, for example, is designed to be a reserve for residents who outlive their financial resources due to no fault of their own. If a resident is unable to pay the full cost of their monthly fee, the fund offsets the difference.

Five Galloway Ridge residents are currently receiving benevolent care at a projected end-of-year cost of $150,000. Some of the money comes from the annual Galloway Ridge Gala, a reception and silent auction. This year's silent auction items brought in $14,000 alone. Much of the Benevolent Care Fund is comprised of an endowment left by a late resident who gave $1 million to the fund. The fund also includes donations from other sources like the Gala, estates and bequests.

In addition, the staff of Galloway Ridge receives support from the residents. In 2018, residents awarded a total of $52,000 to 18 scholarship recipients. The scholarship program is supported by residents' donations and the fund is managed and applicants are selected by the Triangle Community Foundation.

"I was extremely happy because school is very expensive and it helped me pay for the whole semester without having to worry about where I'm going to get the money from. It helped out a lot," said McLeod, who has worked at Galloway Ridge for seven years and is continuing her education. "I think it's pretty awesome because not a lot of companies will help employees further their career in any field that they're interested in pursuing. It just really shows that Galloway Ridge cares about their employees by having this benefit offered to them."

With people like Richardson at the helm and residents like Holton serving where needed and beyond, Galloway Ridge will continue to invest in a charitable culture.