Life behind the sand: land-based activities at the Crystal Coast 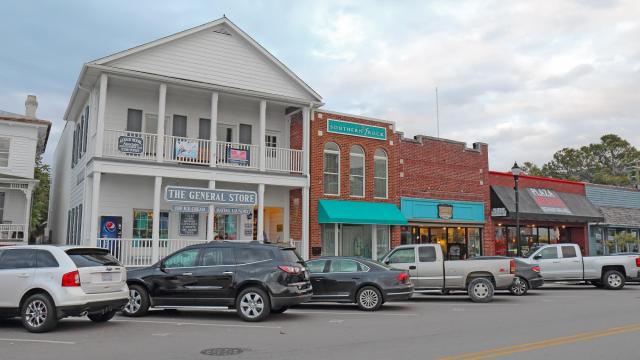 Note: Due to the impact of COVID-19, a number of the activities and events outlined below may be modified or unavailable. Please be sure to check for more details online before making your plans.

The Crystal Coast is home to some of the best beaches in the country, making it a hub for aquatic recreation with its miles of soft, sandy beaches and glistening blue-green waters, which are perfect for surfing, boating and swimming aplenty.

While the coastline is an obvious draw for the area, it's far from all that life on the coast has to offer.

Whether it's exploring the former home of Blackbeard, traversing the trails of a national forest or window shopping along one of the quaint downtown strips, the Crystal Coast offers a plethora of recreational opportunities behind the sand.

From Beaufort to Emerald Isle and everywhere in between, local shops are scattered up and down the coastline and inland. Be sure to check out popular ones like: Beaufort Bicycle, Dee Gee's, Silver Line or AB Surf Shop. For those looking to capitalize on discounts, second-hand shops also hold a number of hidden treasures.

"Plenty of people here buy furnished condos and want to get rid of everything in it," mentioned Kelinda Rike, a local real estate broker with Linda Rike Real Estate. "The resale shops, like the Salvation Army and Skinny Fish Consignment, typically have some pretty good deals."

After working up an appetite window shopping, Rike recommends checking out a few local haunts like the Ruddy Duck, Moonrakers and Bistro by the Sea.

Few things go together better than baseball and summertime.

In Carteret County, Morehead City's collegiate summer baseball team, the Morehead Marlins, hosts games all summer long, playing other teams from the area, including the Fayetteville SwampDogs, the Wilmington Sharks, the Holly Springs Salamanders and the Edenton Steamers. The team plays at O'Neal Field at Big Rock Stadium and there is no shortage of amateur talent as alumni have gone on to play for teams like the Baltimore Orioles and the Los Angeles Dodgers.

"It's good, it's wholesome stuff," said Wyatt Rike, brother of Kelinda and fellow real estate agent at Linda Rike Real Estate. "Baseball is America's pastime, and what better place to enjoy it than at the beach?"

While baseball is one of the more popular sports on the Crystal Coast, golfing still reigns supreme.

Around the area, there are a number of courses to choose from, including the Morehead City Golf and Country Club, the Beaufort Club, and the Country Club of the Crystal Coast.

There are plenty of outdoor parks and recreational areas to explore in Carteret County.

One of the area's most popular is the Croatan National Forest, which sits just on the edge of Newport. It's filled with hiking trails that wind through hardwood forests and salt marshes, and features small lakes and ponds teeming with everything from sunfish to pickerels, and rare flora like Venus flytraps and pitcher plants.

Closer to the coastline and at the end of the barrier islands, there's the historic Fort Macon State Park, which was constructed in 1826 as an early defense system. Now, the imposing structure offers trails that run from the beachfront to the marshes, as well as ample fishing along the inlet. Additionally, the park regularly hosts events and programs, including musket and cannon demonstrations, guided hikes and stargazing nights.

The Crystal Coast is one of the most ecologically diverse areas in the state, with hundreds of species of birds and aquatic creatures. For those looking to take a break from the beach, pack a pair of binoculars and take a trip to the Croatan National Forest, which is home to prime bird watching.

"We do have bald eagles here; they're everywhere. I've seen their nests down on the outlying parts of the eastern end of the county. Up high in the tree, you can spot where they hang out," Wyatt said. "We have hummingbirds, too. The Ruby-throated hummingbird is the one that's indigenous to the area."

For those looking to get a more up-close-and-personal look at the coast's aquatic residents, the North Carolina Aquarium at Pine Knoll Shores has several touch tanks, live dives every afternoon, and a number of behind-the-scenes tours and adventures — perfect for family outings and marine enthusiasts alike.

Summertime is home to some of the most popular events on the Crystal Coast, but even in the shoulder seasons, community events fill almost every weekend on the calendar.

"There are a lot of events and things to do here, people are always organizing things," Wyatt said. "There's Shuck, Rattle and Roll, which is an oyster event in March, and the Winter Taste of Core Sound. This stuff is all done in cold weather, so no matter what you're interested in, you'll find something to do all year round."

With music, food, arts and more, the Crystal Coast community is always abuzz with activity, far-removed from the waterfront.

"As with anywhere, a place is what you make it," said Wyatt. "However, here in the Crystal Coast, we have the means to entertain year round, as well as opportunities for quiet enjoyment — whether it's at the beach or beyond the sand."