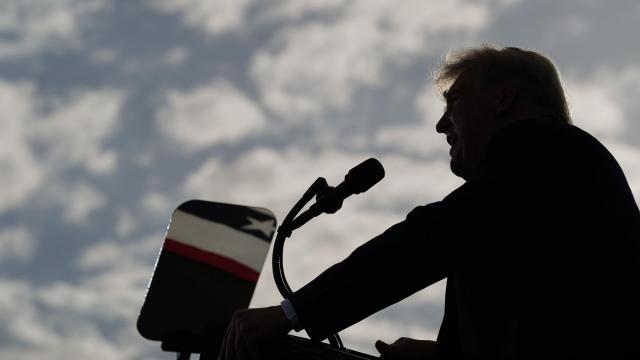 Donald Trump lies a lot. In fact, he lies so often that several media organizations try to keep a running tally and even try to draw political inferences from fluctuations in the number of lies he tells in a given month (although the trend has been relentlessly upward).

But we’ve crossed some kind of threshold in the past few weeks. It’s not so much that Trump is lying more as that the lies have become qualitatively different — even more blatant and increasingly untethered to any plausible political strategy.

Back in the day, Trump lies tended to be those like his repeated claims that he was about to unroll a health care plan that would be far better and cheaper than Obamacare, while protecting preexisting conditions.

Those of us following the issue closely knew that there was no such plan — indeed, that there couldn’t be, given the logic of health insurance; we also knew that he had made the same promise many times but never delivered.

But ordinary voters aren’t experts in health policy and might not have remembered all those broken promises, so there was at least a chance that some people would be fooled.

In a way, Trump’s claims to be the victim of a vast “deep state” conspiracy were similar. They were obvious nonsense to people familiar with how the government actually works. But many voters aren’t experts in civics, and the conspiracy theorizing — like his claims that all negative reports are “fake news” — helped shield him from awkward facts.

But Trump’s recent lies have been different.

On Tuesday the White House science office went beyond Trump’s now-standard claims that we’re “rounding the corner” on the coronavirus and declared that one of the administration’s major achievements was “ending the COVID-19 pandemic.”

Whom was that supposed to convince, when almost everyone is aware not only that the pandemic continues but also that coronavirus cases and hospitalizations are surging? All it did was make Trump look even more out of touch.

Wait, it gets worse. In last week’s debate, Trump declared that New York is a “ghost town.” Eight million people can see with their naked eyes that it isn’t.

On Monday, campaigning in Pennsylvania, Trump repeatedly claimed that, thanks to the state’s Democratic governor, “You can’t go to church.” Thousands of churchgoing Pennsylvanians know that this simply isn’t true.

On Wednesday, campaigning in Arizona, Trump went on a rant about California, where “you have a special mask. You cannot under any circumstances take it off. You have to eat through the mask. Right, right, Charlie? It’s a very complex mechanism.” As 39 million California residents can tell you, nothing remotely like that exists.

Again, whom is this supposed to convince? It’s hard to see any political upside to such ludicrous confabulations, which demand that people reject their own direct experience. All they do — I hate to say this, but it’s obvious — is raise questions about the president’s stability.

So what’s going on? Trump wouldn’t be the first politician to lash out wildly in the face of electoral defeat. “You won’t have Nixon to kick around anymore.” Remember, also, that Roy Moore, defeated in Alabama’s 2017 special Senate election, never conceded.

In fact, almost everyone expects the mother of all temper tantrums, quite possibly including calls for violence, if Trump does, in fact, lose next week. To some extent he may just be getting an early start.

But there’s also, I’d argue, something deeper going on. What Trump has been revealing, more clearly than ever before, is that he has a totalitarian mindset.

After those bizarre claims about California masks, I reread George Orwell’s classic essay “Looking Back on the Spanish War.” Observing Spain’s fascists and their fellow travelers — including many in the British press! — Orwell worried that “the very concept of objective truth is fading out of the world.” He feared a future in which, if the leader “says that two and two are five — well, two and two are five.”

The point is that for Trump and many of his supporters, that future has already arrived. Does he believe that there’s any truth behind his bizarre claims that Californians are being forced to eat through complicated masks? That’s a bad question because he doesn’t accept that there is such a thing as objective truth. There are things he wants to believe, and so he does; there are other things he doesn’t want to believe, so he doesn’t.

What’s scary about all this isn’t just the possibility that Trump may yet win — or steal — a second term. It’s the fact that almost his entire party, and tens of millions of voters, seem perfectly willing to follow him into the abyss.

Indeed, current Republican strategy is almost entirely based on trying to scare voters about bad things that aren’t happening — like a vast wave of anarchist violence sweeping America’s cities — while not noticing bad things that really are happening, like the pandemic and climate change.

This strategy may or may not work; this year it probably won’t. But either way, it will poison America’s political life for many years to come.