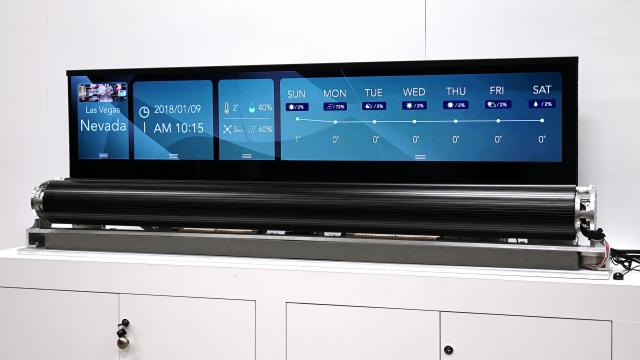 SAN FRANCISCO (CNNMoney) — With the press of a button, LG Display's 65-inch screen slowly lowers into a box, rolling up around a solid core like wrapping paper.

The tech company showed off an impressive prototype of its latest rolling-screen technology at International CES 2018 in Las Vegas.

Last year, it demoed a smaller 18-inch version that could fit in your back pocket. But now its latest -- and much larger -- display can roll up, too.

The front of the 4k OLED display works and looks just like a regular TV screen. When rolled out, it's rigid and flat. The back is covered in small vertical slats, which allow it to curve for storage.

The screen can also be rolled partially down to create different aspect ratios. A few inches of the display can be left up to show information like the weather or headlines.

LG Display -- a research arm of LG Electronics, Corp -- focuses on developing innovative display technologies, which it then sells directly to display manufacturers that want to use them in their own products. So don't look for a massive roll-up TV in Best Buy just yet.

But an easy-to-store display could appeal to consumers and businesses who want a ginormous television but don't have enough space.

Flexible screens have been popping up at the technology show for the past few years. Although curved televisions haven't taken off, the technology could be put to better use in something like this.

Any company that uses the technology can decide how to best hide the display when its off. It could be part of a coffee table or hidden in a ceiling.

LG Display also debuted an 88-inch 8K television with an OLED display. The incredibly high-resolution 8K displays aren't mainstream here yet, and there's a dearth of 8k content to even show on them, but LG Displays is getting ready for the future.

LG Display showed off an updated version of its "crystal sound" 65-inch prototype, which plays sound directly from the parts of the screen where the events are happening. So you'll hear a person yelling on the left, a car crashing on the right, or a hawk flapping its wings above.