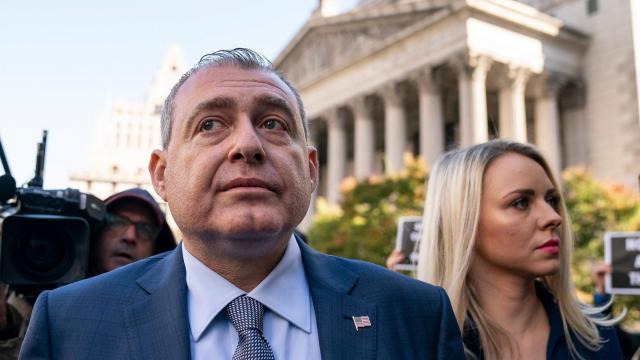 CNN — Lev Parnas, the Soviet-born businessman whose work in Ukraine with President Donald Trump's personal attorney Rudy Giuliani stands at the center of the impeachment inquiry, implicated the President Wednesday in an interview with CNN in which he said that their efforts were "all about 2020" and not about working in the interest of the United States.

"That was the way everyone viewed it," Parnas told CNN's Anderson Cooper, disputing Trump's claim that the push to unearth damaging information about his political rival, Democratic presidential candidate and former Vice President Joe Biden, stemmed from concerns about corruption in Ukraine.

"That was the most important thing," Parnas said, "for him to stay on for four years and keep the fight going. I mean, there was no other reason for doing it."

Since Parnas's indictment in October by New York federal prosecutors on campaign finance charges alongside another Giuliani associate, Igor Fruman, Parnas has publicly broken with Trump and Giuliani, distancing himself through the steady release of information damaging to the President. That was a sharp turn from Parnas' previous devotion to Trump.

"I loved him," Parnas said.

"I mean, when the FBI came to my house to raid, my wife felt embarrassed because they said I had a shrine to him. I had pictures all over. I idolized him. I thought he was the savior," he recalled, later adding that his 5-year-old son voted for Trump in school.

Parnas has been urging Congress to allow him to testify as part of the impeachment inquiry, and on Wednesday he said the Senate would be wise to call him as a witness. He added that he and former national security adviser John Bolton "could fit in all the dots, I think, because I was on the ground there, and he was over here."

When Trump denied any association with Parnas following the indictment, Parnas turned on him.

"The truth is out now, thank God," he said. "I thought they were going to shut me up and make me look like the scapegoat and try to blame me for stuff I haven't done," he said.

Parnas described two occasions on which he delivered messages to Ukrainians that amounted to quid pro quos, demanding the announcement of an investigation into Biden and his son Hunter Biden in exchange for benefits from the White House.

The first, he recalled, was during an early 2019 meeting with then-Ukrainian President Petro Poroshenko, in which Poroshenko was told that if he announced an inquiry regarding the Bidens and the Ukrainian energy company Burisma -- where Hunter Biden was a board member -- "Trump would either invite him to the White House or make a statement for him, but basically would start supporting him for president."

The second occurred after Poroshenko's successor, Volodymyr Zelensky, won the election. The White House knew attendance by the Trump administration at Zelensky's inauguration would be valuable, and in a meeting with a Zelensky aide, Parnas conveyed a message.

"I told them, very strict and stern, that several things: A. That he needed -- Zelensky needed to immediately make an announcement literally that night or within the next 24 hours that they were opening an investigation on Biden," Parnas recalled. He also told the aide that the Ukrainians needed to "get rid of certain individuals that are enemies of the president in his administration."

Asked if the conversation touched on the military aid the US was due to provide to Ukraine, Parnas said: "Yeah, if they didn't make the announcement, basically, there would be no relationship."

He continued, referencing the possibility of Vice President Mike Pence attending Zelensky's upcoming inauguration: "It was no specific military, there was no aid that would be assisted. There was going to be no inauguration, Pence wouldn't be at the inauguration. And there would be no visit to the White House. They would basically have no communication."

Asked if Pence knew what Giuliani and his associates were up to, Parnas said he wasn't sure if the vice president knew "everything we were doing." Pressed on whether Pence was aware of a quid pro quo, Parnas replied: "Everybody that was close to Trump knew this was a thorn in the side and this was a serious situation."

As several witnesses who testified in the House impeachment inquiry attested, the goal of the effort by Trump and Giuliani regarding a Biden investigation was merely to prompt the announcement of an inquiry, not necessarily to achieve a probe itself. Parnas confirmed that was the case, saying: "That's because nobody trusted them even to do an investigation."