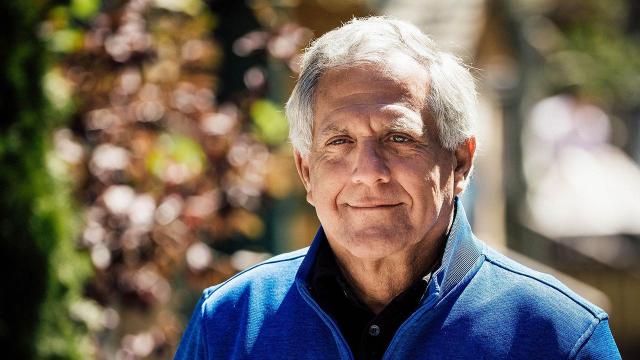 Leslie Moonves, the longtime chief executive of the CBS Corp., stepped down Sunday night from the company he led for 15 years. His fall from Hollywood’s highest echelon was all but sealed after the publication earlier in the day of new sexual harassment allegations against him.

The CBS board announced his departure, effective immediately. As part of the agreement, the network said it would donate $20 million to one or more organizations that support equality for women in the workplace. The donation will be deducted from a potential severance benefit to Moonves, although he could still walk away with more than $120 million, according to two people familiar with the settlement agreement.

Moonves, however, will not receive any severance payment, until the completion of an independent investigation into the allegations, the board said. He could also receive nothing, based on the investigation’s results.

Joseph Ianniello, chief operating officer of CBS and one of Moonves’ closest advisers, was named the interim chief executive.

The departure of Moonves marks a stunning reversal for an executive who is credited with turning CBS into television’s most-watched network. But he has been under intense pressure since July, when The New Yorker published an article by investigative journalist Ronan Farrow in which six women accused Moonves of sexual harassment. On Sunday, the magazine published another article by Farrow in which six more women detailed claims against Moonves. Moonves is the latest high-powered entertainment figure to be ousted from his perch in the #MeToo era. Movie producer Harvey Weinstein has been accused by scores of women of sexual assault and now faces felony charges. Matt Lauer stepped down as the anchor of NBC’s most valuable news program, “Today,” after several women alleged incidents of sexual harassment. Charlie Rose of CBS and PBS left the airwaves after he, too, was implicated by multiple women. And Fox News saw the departures of founding executive Roger Ailes and its top-rated host, Bill O’Reilly. All of those men have denied any nonconsensual sexual activity.

Many of the men who have been toppled spent years determining what TV shows, movies and news programs millions of Americans watched on a daily basis. The allegations go back years — in some cases even decades. And the wave of scandals is a stark reminder of how male-dominated the entertainment and news industries remain, especially in their upper ranks.

When the most recent television season ended in May, CBS was the nation’s most-watched network for the 10th consecutive year — an accomplishment that had made Moonves one of the most powerful figures in Hollywood. Now his departure has helped cast the future fortunes of the company in doubt.

For several weeks, Moonves has been grappling with two separate but equally fateful issues while negotiating a settlement with CBS Corp.'s board of directors on his exit. In addition to the multiple harassment allegations against him, Moonves has been involved in a protracted legal fight with the company’s controlling shareholder, Shari Redstone. All parties have now agreed to dismiss the lawsuit. The company also announced that it was adding six members to its board. The new slate of directors adds three women to the 12-member board, raising the number of female members to six.

The talks included a potential payout to Moonves that could have been as much as $280 million, according to one of the people briefed on the matter, before board members negotiated that down to more than $120 million. But a security filing from April states that the company would not have to pay Moonves if the board fired him for cause, such as violating company policies regarding sexual harassment.

The size of the payout had been a source of contention in the negotiations, according to three people familiar with the discussions who spoke on the condition of anonymity to discuss a private bargaining agreement.

That Moonves could receive any money for stepping away from CBS in the wake of the allegations outraged many in the entertainment industry and in the #MeToo movement.

“It’s completely disgusting,” one of the accusers, Jessica Pallingston, told The New Yorker about the reports of Moonves’ potential exit package, which had been reported last week to total more than $100 million. “He should take all that money and give it to an organization that helps survivors of sexual abuse.”

The pace of the board’s deliberations accelerated after Farrow contacted the board last week regarding his latest article, according to one of the people familiar with the negotiations.

The incidents described in the two articles went back to the 1980s and brought the number of women now accusing Moonves of harassment to 12.

The women claim that Moonves, 68, had forced himself on them and in some cases retaliated professionally after some declined his advances. One woman, a veteran television executive named Phyllis Golden-Gottlieb, filed a complaint with the Los Angeles Police Department last year, according to The New Yorker. She said Moonves forced her to perform oral sex on him and, in another instance, had “violently” thrown her against a wall.

Golden-Gottlieb described encounters as having occurred nearly 40 years ago when Moonves was the leading executive at Lorimar Television. But other women in the article detailed harassment that they said happened while Moonves was at CBS. Moonves joined the network in 1995 and became chief executive of the company in 2003.

Moonves did not respond to requests for comment from The New York Times on Sunday, but told The New Yorker, “The appalling accusations in this article are untrue.” He admitted to “consensual relations” with three of the women.

“In my 40 years of work, I have never before heard of such disturbing accusations,” Moonves continued. “I can only surmise they are surfacing now for the first time, decades later, as part of a concerted effort by others to destroy my name, my reputation, and my career.”

Public reaction to the latest allegations against Moonves was swift. Rachel Bloom, the star and co-creator of “Crazy Ex Girlfriend,” which airs on The CW, a network jointly owned by CBS and Warner Media, said on Twitter after The New Yorker article was published that Moonves should be fired without receiving any money, adding an expletive.

“The actions described in this article are those of sexual assault and shame on anyone else in the corporation who knew about his crimes,” she wrote. Reports of Moonves’ possible payout also spurred outrage among advocacy groups. “These allegations speak to a culture of toxicity at CBS,” a statement from the group Time’s Up said before the announcement that Moonves was departing.

Moonves, who grew up on Long Island, got his start in show business as an actor and often played the bad guy in series like “The Six Million Dollar Man” and “Cannon.” But by 1977, he all but quit the profession, and moved behind the camera. Moonves got his first break when Saul Ilson, the producer of “The Smothers Brothers Comedy Hour,” tapped him to become a development executive.

After working at Lorimar — which produced shows like “Dallas” and “Full House” — Moonves eventually became the head of Warner Bros. television unit, where he enjoyed one of the most successful runs in TV history. By the time Moonves left Warner Bros. to lead CBS Entertainment in 1995, he had a record-breaking 22 series on the air, including megahits like “ER” and “Friends.”

At that time, CBS was last in the ratings and catered to an older audience that enjoyed series like “Dr. Quinn, Medicine Woman” and “Touched by an Angel.” Moonves finally turned things around for good in 2000, when “Survivor” and “CSI” debuted within a few months of each other. “Survivor” would become one of the most successful reality shows in television history, and “CSI” would run for 15 seasons and served as a launching pad for several successful spinoffs. Hit after hit started to appear on CBS, from “NCIS” to “The Big Bang Theory.”

Moonves has drawn an annual pay package worth $69.3 million. From 2006 to 2017, Moonves’ total compensation, including salary and stock awards, totaled more than $1 billion, according to Equilar, a research firm that gathers data on executive pay.

Shortly after the first New Yorker article was published, the CBS board enlisted two law firms to lead an inquiry into the claims against Moonves and the wider workplace culture at the network. The board soon after folded a separate examination of CBS News — underway since March — into the larger investigation.

The board hired Nancy Kestenbaum of Covington & Burling and Mary Jo White of Debevoise & Plimpton to conduct the inquiry. White led the Securities and Exchange Commission during the Obama administration and was previously the U.S. attorney for the Southern District of New York. Kestenbaum was also a federal prosecutor with the same district. The investigation into CBS News is also being overseen by the two law firms. In addition to the harassment allegations against him, Moonves was involved in a legal dispute with Redstone, the controlling shareholder of CBS, who had been pushing for a merger with Viacom, the once-lofty cable network behind MTV and Nickelodeon that she also controls.

The settlement with Moonves and the CBS board includes delaying for two years any push by Redstone for a possible merger. The board of CBS, however, could still examine any possible transaction, including a Viacom merger, independently of Redstone.