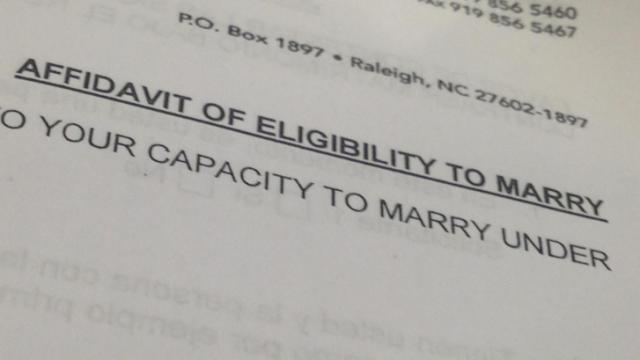 Shelly Carver, a spokeswoman for Senate President Pro Tem Phil Berger, said he and House Speaker Thom Tillis plan to go through with an appeal even though legal experts say it is unlikely to succeed.

The court to which any North Carolina appeal would go would be the 4th U.S. Circuit Court of Appeals, the same court that ruled Virginia’s same-sex marriage ban unconstitutional. That was the ruling that led to North Carolina’s ban being overturned as well.

In a statement on Tuesday, Berger pointed to the voters who approved the North Carolina definition of marriage as between one man and one woman. "This decision is an important step to ensure their voice is heard,” he said.

In order for lawmakers to win on appeal, University of North Carolina School of Law professor Maxine Eichner said, “The 4th Circuit would have to reverse its previous decision. There is nothing to suggest that it would plan to do that.”

Lawmakers could ask the Supreme Court for a discretionary review of the case and an emergency stay, but Eichner predicts the Supreme Court will deny both the stay and the review, based on its actions in other recent marriage cases.

"It seems very difficult to imagine that they would accept review after they rejected review of the 4th Circuit decision before,” she said.