Sanford, N.C. — Some in Lee County are calling for the resignation of Board of Education member Patrick Kelly after images of him in a sexual nature appeared online.

The board addressed the topic of Kelly and a complaint filed against him during a meeting Tuesday night.

The board said no comment would be made during the investigation, but WRAL News obtained a statement from Kelly where he says his private life was on display without his knowledge or permission.

“There is a photo of me circulating that shows two single consenting adults engaged in a perfectly legal activity. The photo was intended to be private, and I would have preferred that it remained private," Kelly said in his statement. "No one deserves to have their private life put on display like this." 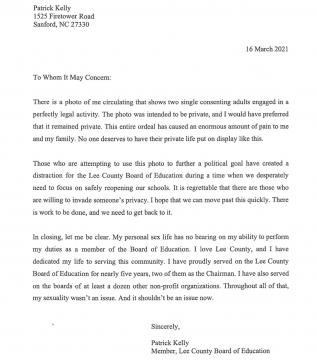 "[On Monday] night, the Lee County Board of Commissioners received documentation and photos exposing school board member Patrick Kelly in a rather 'unprofessional' image. That said, it is beyond me to comprehend how an individual with such a grotesque character flaw can even remain on a local school board, supervising the teaching of impressionable children.

"With our local school board comprised of four women, it must be extremely uncomfortable to work with an obviously misogynistic individual. Any man who sees himself as dominate over women, has no place on a Board of Education. In this era of spouse and sexual abuse, his demeaning photos showing the physical beating of women clearly reveals an individual unfit for elected office.

"You should immediately demand his resignation from the Lee County School Board and public apology for his disparaging behavior toward women."

Womack’s wife is on the school board, and she, too, was under investigation recently for attending the U.S. Capitol rally on Jan. 6.

One Lee County teacher and a parent spoke in support of Kelly Tuesday night.

Kelly did not comment on the allegations during the school board meeting, but in his statement, he said his sex life does not impact his ability to perform as a school board member.

"Those who are attempting to use this photo to further a political goal have created a distraction for the Lee County Board of Education during a time when we desperately need to focus on safely reopening our schools," he said.