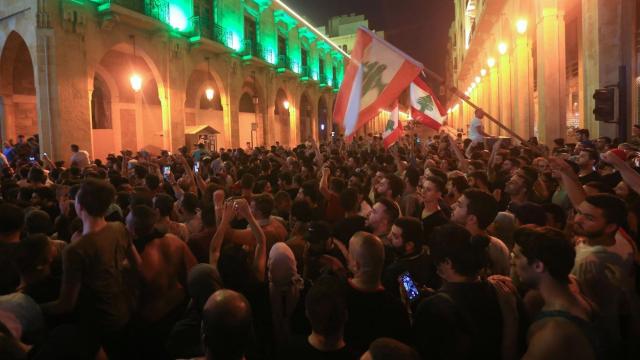 CNN — Thousands of protesters filled the streets of downtown Beirut as part of nation-wide demonstrations over deteriorating economic conditions and new austerity measures.

The demonstrations began in Lebanon on Thursday evening and continued into the early hours of Friday morning.

Forty members of Lebanon's Internal Security Forces (ISF) were wounded in the protests, the ISF said in a tweet. The ISF called on protesters to refrain from "chaos and violence."

Roads leading to Beirut's international airport were also closed by the protesters, forcing travelers to leave the airport on foot as they pulled their suitcases past protest sites in search for transportation.

Earlier on Thursday, the government had announced it would charge 20 cents per day for voice over internet protocol (VOIP), a feature used by Whatsapp, Facebook and other applications. The cabinet also said it would discuss further hikes in value added tax. The announcements drew the ire of Lebanese social media users during the day, and may have helped bolster the night-time protests.

The demonstrations are the largest the country has seen since a 2015 trash crisis sparked large-scale protests in Beirut. The country has grappled with growing inflation, stagnant economic growth and ballooning debt. Lebanon's decaying infrastructure, which includes long and frequent power outages, has meant that living standards have dropped for many Lebanese.

Around a third of Lebanon's population lives under the poverty line, according to the World Bank.

Lebanon's lira, which is pegged to the US dollar, has also come under increasing pressure.

Demonstrators set a construction site on fire in Beirut and broke into a municipality building in the south of the country, according to the state-run National News Agency.

The protests come amid growing calls for the resignation of Prime Minister Saad al-Hariri's government.

In an interview with local broadcasters LBC on Thursday night, prominent Druze politician Walid Joumblatt asked Hariri to step down and vowed to keep his party members out of future government coalitions. At least one other political party has also said it would withdraw its minister from Hariri's cabinet.

Hariri heads a national unity government that includes members of Hezbollah and its Christian allies, the Free Patriotic Movement.

The government has sought to approve a 2020 budget, which could allow billions of dollars in international donor pledges to be granted to Lebanon. Iraq and Egypt have also been gripped by protests over government mismanagement in recent weeks.