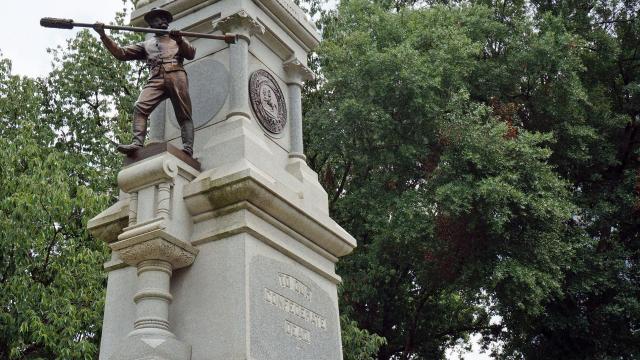 Raleigh, N.C. — A prominent group of more than 60 North Carolina attorneys urged Gov. Roy Cooper and other state officials Wednesday to remove Confederate monuments from the State Capitol grounds, arguing in a letter that they "offend guarantees in our state and federal constitutions."

"It is fair to say that the signatories believe the statues violate the state and federal constitutions," Hampton Dellinger, one of the signers, said in an email. "That’s how it would be presented in a lawsuit."

Dellinger and other attorneys on the letter were part of a thus far successful effort to keep the Confederate "Silent Sam" statue from returning to the University of North Carolina at Chapel Hill campus after protesters toppled it two years ago. Dellinger said he hopes a lawsuit isn't needed in that case but said the group "has many who could file ... and we believe it would succeed."

A state law passed in 2015 says monuments can't be moved from state grounds except in a narrow set of circumstances. A Cooper push to move Confederate monuments from Capitol Square in downtown Raleigh petered out in 2018 after the North Carolina Historical Commission declined to back the move, referenced the 2015 law and suggested new signs to add context instead.

Those signs may get state funding in the coming days, along with several million dollars for new monuments at the square honoring African-American heritage and a new statue park nearby to do the same. The Senate approved that funding this week, and it's awaiting action in the House.

The letter argues that, though the 2015 law should be repealed, the state "has an overriding obligation" to remove monuments from "important civic spaces" to comply with the state and federal constitutions.

From county and road names to statues, dozens of Confederate monuments in NC

The monuments are government speech, the letter states, and "racist government speech in the form of state-sponsored Confederate monuments is inconsistent with North Carolina’s obligations" under the equal protection clause of the 14th Amendment to the U.S. Constitution.

"These displays are inextricably tied to secession, slavery, and white supremacy ..." the letter states. "The government-sanctioned expression at issue here is an affront to the commitment to racial equality embodied in the post-Civil War amendments."

The governor's office didn't immediately respond to a request for comment Wednesday afternoon but reached out after this story posted. A spokeswoman did not speak to the legal theory presented in the letter.

"Governor Cooper believes Confederate monuments should be removed from places of allegiance and placed at museums and related historical sites where they can be examined in proper context," spokeswoman Dory MacMillan said. "The law passed by the General Assembly has prevented the Capitol monuments from being removed thus far."

Speaker of the House Tim Moore's office did not respond to a request for comment.

Senate President Pro Tem Phil Berger said after the Senate's afternoon session Wednesday that he hadn't seen the letter, but the legal argument "sounds like a fairly creative interpretation of equal protection."

Berger, R-Rockingham, is the Senate majority's leader and an attorney.

As for the 2015 law, there is no apparent momentum to change it at the statehouse. Berger said that people disagree over what the monuments mean, so the current plan to add signs and new monuments to honor African Americans makes sense.

​"I think the contextualization is an appropriate approach for the monuments that are there so that those divergent views at least have an opportunity for expression," he said.

Senate Democratic Leader Dan Blue, who was also copied on the letter, said in a statement that the state has "long needed to take a serious look at what we’re conveying with statues on our state grounds."

"These monuments memorialize men whose beliefs and actions directly contradict the founding principle of our constitution, that all men are created equal," said Blue, D-Wake.