Raleigh, N.C. — A woman said that two men pulled a gun on her and her daughter and used racist language near a shopping center in Raleigh on Monday night.

Zariel Balogun said as she was leaving BJ’s with her daughter, she noticed a black truck in her rear view mirror as she waited at the four-way stop.

"It didn't seem like he was going to stop at the stop sign, so I honked my horn," she said.

The driver got into the passing lane, but then approached her on the left hand side and started using racial epithets at her and her teenage daughter, she explained.

Balogun told WRAL News two men were inside the truck and one of the men pulled out a gun.

"When he pulled his gun out, I informed him, 'Put your gun away because you're not going to do anything with it,'" she said.

She said that the man was wearing a "Make American Great Again" hat, reversed his car, drove up beside her and said, "You guys are the very reason why we have to make America Great Again." Then, he continued to use racist and sexist language.

Balogun immediately called 911 to report the incident. She said the interaction with the two men goes beyond road rage, and she is thankful the men did not pull the trigger.

"If he wanted to shoot, there's nothing that I could have done," she said, "He pointed the gun at me and my child."

Raleigh police said back in July the incident was under investigation. According to an incident report, it was being investigated as an aggravated assault.

"Mr Wilkinson has been charged with two counts of assault with a deadly weapon," Freeman said Wednesday night. "After a thorough investigation, the evidence of how the victim and defendant’s interaction unfolded did not support a finding that the defendant’s actions were initiated because of race."

Balogun said she gave the police a photo of the car involved, with the license plate clearly pictured.

WRAL has blurred out the license plate in the image below because no charges have been filed yet.

"I just want people to know they need to report these incidents, because it's happening and no one's saying anything about it," Balogun said.

The very next day, Balogun joined with the North Carolina Black Alliance and Emancipate NC to share her experience outside of the Wake County Courthouse.

At the conference, a lawyer with Balogun, Dawn Blagrove, said that Raleigh Police have not returned her call for over 24 hours.

"To those folks who are still confused about why we have to say and proclaim that Black Lives Matter, it is because a black woman and her 16-year-old child can be driving down the streets of Raleigh and a white man, who hurls racial slurs at them, points a gun at her 16-year-old child can call the police department of Raleigh and not have anyone return her call for more than 24-hours," Blagrove said.

The lawyer directly called on Freeman and Raleigh Police Chief Cassandra Deck-Brown to investigate what the activists and lawyer are calling a hate crime.

“Those are things, that not only do we take seriously, but the law takes seriously,” Freeman said.

Blagrove said that this incident is also an issue of gun violence, where men are "wielding guns at people in the streets." Blagrove called the men an "ongoing threat" and called on Deck-Brown to act. 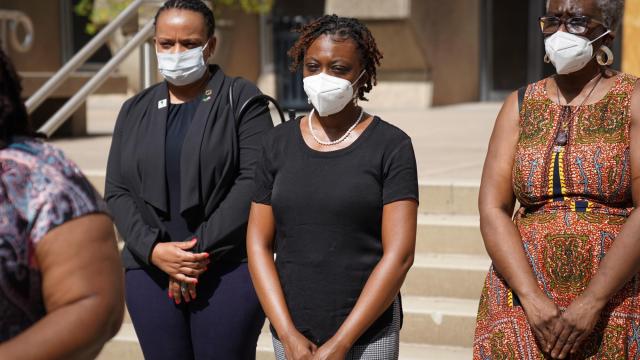 Blagrove said that they requested surveillance footage of the incident from BJ's, but their national headquarters told Blagrove that a copy of any sort of surveillance video would only be released to law enforcement through a court order.

Marcus Bass, a leader with the North Carolina Black Alliance, is calling on anyone who may have been a witness of this incident to speak out.

"It is not good enough to be non-racist, you have to be anti-racist," Bass said. Being anti-racist, he added, is actively speaking out against racism.

"This community is a hotbed of this kind of racial intimidation," Blagrove said, citing a recent racist, threatening neighborhood letter that was sent anonymously to an interracial couple.

"We are going to make sure justice is served in this case," Bass said.