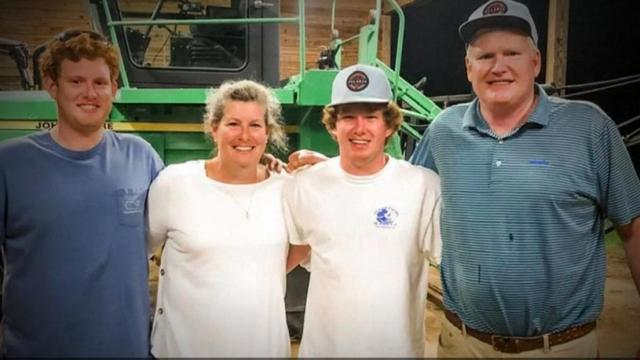 The prominent South Carolina lawyer whose life has unraveled in the months since his wife and son were fatally shot was arrested Thursday after he admitted to trying to stage his own murder earlier this month, but he maintained that he had no involvement in the killing of his family.

Alex Murdaugh, the lawyer, was charged with insurance fraud, conspiracy to commit insurance fraud, and filing a false police report, all felonies, in connection with the suicide scheme, which his lawyers said was meant to ensure that his other son could collect on a $10 million life insurance policy.

In a Hampton County courtroom Thursday, Murdaugh wore a jail jumpsuit and wept behind a face mask as Dick Harpootlian, one of his lawyers, described his “fall from grace” in the wake of the deaths of his wife and son.

“The only violence he’s ever been involved in is this, which was to have himself executed,” Harpootlian said in court, adding: “The only person he’s a danger to is himself.”

A judge released Murdaugh without requiring that he forfeit any money, but she did order him to surrender his passport and sign a waiver of extradition because he will be staying at a rehabilitation center in another state where he is seeking treatment for an oxycodone addiction.

Murdaugh was depressed by the loss of his family and struggling to stop abusing the painkillers when he devised the self-execution plan, his attorneys said. They said he had wrongly believed that his insurance policy would not pay out if his death was ruled a suicide.

The arrest of Murdaugh, 53, is the latest turn in a series of stunning developments in the rural South Carolina Lowcountry, where the Murdaugh family has built power over more than a century — first by leading a regional prosecutor’s office for eight decades over three generations, and more recently through its family law firm.

The killing, in June, of Murdaugh’s wife, Maggie, and their college student son, Paul, brought intense scrutiny to the Murdaughs and to three other deaths that took place in proximity to the family in recent years.

In 2015, a 19-year-old man, Stephen Smith, was found dead along a road 10 miles from the Murdaugh home, with his death ruled a probable hit and run. In 2018, a longtime housekeeper for the Murdaugh family, Gloria Satterfield, 57, died in what was initially described as an accidental fall, but an autopsy was never conducted. And, at the time he was killed, Paul Murdaugh was facing charges that he had drunkenly crashed a boat in 2019, killing 19-year-old Mallory Beach.

The deaths of Murdaugh’s wife and son spurred the South Carolina Law Enforcement Division to open new investigations into the deaths of Satterfield and Smith. The police have not accused the Murdaughs of wrongdoing in either case. Satterfield's sons, who are in their 20s, said this week that they had never received any money from a $505,000 settlement with Murdaugh over their mother's death and that Murdaugh had introduced them to the lawyer who represented them in the case.

The state police agency is also investigating claims by the leaders of his family law firm that he had misused millions of dollars of client and firm money, which Murdaugh’s lawyers have not denied. Earlier this month, the leaders of the firm told Murdaugh that he had to resign.

The next day, Sept. 4, Murdaugh asked one of his former clients, Curtis E. Smith, 61, to kill him on the side of a rural road, police said. Murdaugh was shot in the head but survived with minor injuries and was released from the hospital after two days. He told police at the time that he had been shot by someone who had pulled up beside him as he was changing a tire, a story that he now admits was false.

Days after the shooting, Murdaugh issued a vague statement apologizing to his family and colleagues and said he was going to get help for an oxycodone addiction.

His lawyers said he had bought most of the oxycodone he took from Smith, whose bond a judge set at $55,000 Thursday morning, and who muttered in court about the case being “crap.” Smith did not have a lawyer with him and said he was going to look into getting a public defender. Later Thursday, he was released after posting bond.

Chief Mark Keel of the South Carolina Law Enforcement Division said in a statement that agents would keep working to bring justice to anyone involved in the various investigations that the killings of Murdaugh’s family members have spurred.

“The arrests in this case are only the first step in that process,” he said.

The South Carolina attorney general is prosecuting cases that come out of the Murdaugh investigation after the chief prosecutor in the region recused himself because he had worked closely with Murdaugh’s father, who served as the previous chief prosecutor until 2006. This article originally appeared in The New York Times.