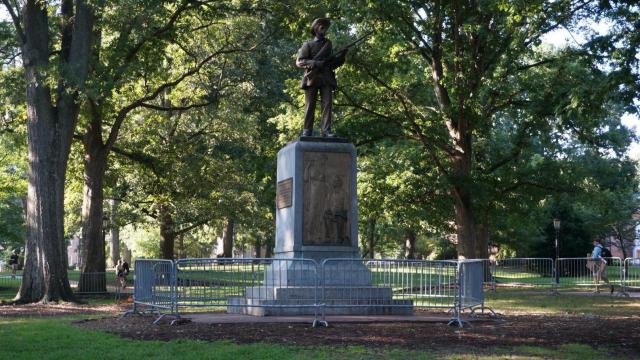 Chapel Hill, N.C. — A law firm on Wednesday urged the University of North Carolina at Chapel Hill to remove the "Silent Sam" Confederate soldier statute from campus or risk being sued for fostering a racially hostile learning environment.

In a letter sent to UNC President Margaret Spellings, UNC-Chapel Hill Chancellor Carol Folt and members of the UNC Board of Governors and the UNC-Chapel Hill Board of Trustees, Hampton Dellinger, a Durham attorney representing 12 UNC-Chapel Hill students, a professor and the Black Law Students Association, said the statue violates federal anti-discrimination laws.

Students have rallied several times in recent weeks, calling for Silent Sam's removal, but Folt has said the school lacks the legal authority to act because of a 2015 state law that prevents removing or altering a public monument without state approval.

"[T]hat position is wrong as it ignores UNC’s overriding obligation to comply with federal anti-discrimination laws. UNC is not only free to remove Silent Sam in order to adhere to federal law, it is legally obligated to do so," Dellinger wrote in the letter. "Simply put: UNC’s state law excuse is an insufficient response to a breach of federal law. As a result, you must stop violating federal civil rights laws and remove Silent Sam."

Leaving the statue in the middle of campus is tantamount to being "deliberately indifferent to a racially hostile learning environment" in violation of federal civil rights laws, Dellinger wrote.