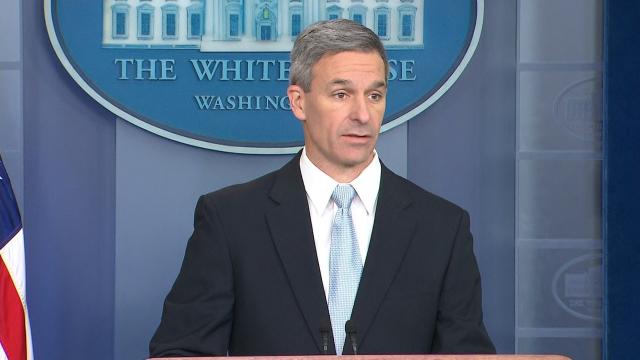 CNN — Advocacy groups filed a federal lawsuit Friday challenging the legitimacy of the acting US Citizenship and Immigration Services Director Ken Cuccinelli to issue a set of "asylum directives" at the agency.

The lawsuit argues that Cuccinelli lacks the authority to serve as acting director and that any directives he issues in that capacity are therefore invalid.

Cuccinelli, who took over at the agency on June 10, does not satisfy the legal requirements to serve as the director under Federal Vacancies Reform Act ("FVRA") and the Constitution, the lawsuit argues.

The case was filed by Democracy Forward and the Catholic Legal Immigration Network, Inc. on behalf of seven asylum seekers and the Refugee and Immigrant Center for Education and Legal Services, a nonprofit that provides legal services to immigrants.

The groups are asking the court to declare the directives unlawful and block the agency from continuing to apply them.

USCIS is unable to comment due to pending litigation, according to a spokesperson.

One of the changes at issue is a move to decrease the time asylum seekers have to prepare for their credible fear interview, the first step in many asylum cases.

In July, the agency said it was reducing the credible fear consultation period to one full calendar day at all facilities, as BuzzFeed reported on the internal policy change.

"As part of our efforts to make the expedited removal process more efficient and effective, USCIS is modifying the consultation period to better align with today's operational realities," USCIS spokeswoman Jessica Collins said in a statement at the time.

Expedited removal is a fast-track deportation process that allows immigration authorities to remove an individual without a hearing before an immigration judge.

The lawsuit, brought against the Department of Homeland Security and USCIS, also challenges a directive to do away with "continuances" to prepare for interviews, as well as bring an end to in-person legal orientation for vulnerable populations.

Prior to the directives, asylum seekers could request continuances if they needed more time to retain or consult with a lawyer or gather evidence, according to the complaint.

The advocate groups also argue that the directives violate additional federal law, in part because they undermine asylum seekers' ability to prepare for their interviews and were implemented without notice or comment.

The Department of Homeland Security and USCIS have inflicted "substantial irreparable harm" to the asylum seekers, who are currently detained at the South Texas Family Residential Center immigration detention center in Dilley, Texas, according to the lawsuit.

As a result of the agency's changes, the asylum seekers in the case and others "now face removal to countries where they face persecution and violence," reads the lawsuit.