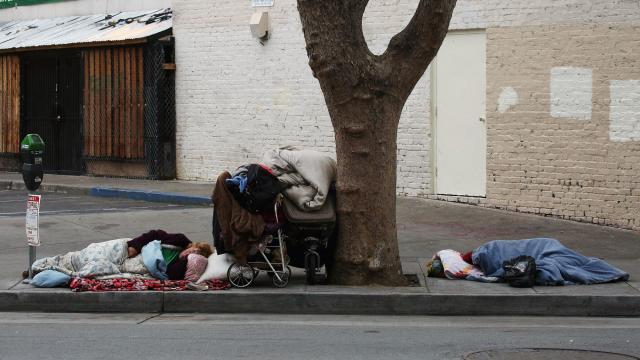 Prosecuting homeless people for sleeping on the streets when there is no shelter available is a form of cruel and unusual punishment that violates the Constitution, a federal appeals court said this week.

The case stems from two ordinances in Boise, Idaho, that make it a crime to sleep or camp in buildings, streets and other public places. Six homeless people who had been convicted under the laws sued the city in 2009, saying their constitutional rights had been violated.

After years of legal wrangling, a three-judge panel of the 9th U.S. Circuit Court of Appeals said in a 32-page opinion Tuesday that Boise’s ordinances “criminalize the simple act of sleeping outside on public property, whether bare or with a blanket or other basic bedding.” The panel added that “a municipality cannot criminalize such behavior consistently with the Eighth Amendment when no sleeping space is practically available in any shelter.”

In their summary of the opinion, the judges wrote, “As long as there is no option of sleeping indoors, the government cannot criminalize indigent, homeless people for sleeping outdoors, on public property, on the false premise they had a choice in the matter.”

The ruling was a victory for homeless advocates, who have long said that laws like the city of Boise’s waste public money, do not alleviate root causes of homelessness like shortages of affordable housing, and punish people simply for being poor.

These issues have taken on increased significance as urban neighborhoods gentrify, said Maria Foscarinis, executive director of the National Law Center on Homelessness and Poverty, a Washington nonprofit that helped argue the Boise case.

In December, the Department of Housing and Urban Development said homelessness had increased in 2017 for the first time in seven years, according to an annual count.

“Gentrification means less affordable housing,” Foscarinis said. “It also means a lot of pressure to remove people who are visibly poor from prominent city areas. These trends are promoting criminalization and promoting these kinds of clashes.”

The Boise ruling would apply to all areas covered by the 9th Circuit, which is based in San Francisco and includes the western portion of the country, including California, Arizona and Washington.

Cities had already been reviewing the homelessness laws they had on the books. John Coté, a spokesman for the San Francisco city attorney’s office, said Wednesday that the office was reviewing the city’s laws to make sure they did not run afoul of the 9th Circuit ruling.

San Francisco voters passed a law in 2016 that prohibits tents on sidewalks, but the tents can be removed only if the city offers placement in shelters or other options for housing. The city must also offer to transport people to the homes of friends or family who could take them in, and give 24-hour notice before removing the tents.

“Our approach is different than Boise’s, but we’re analyzing the ruling to see if it may have implications for San Francisco,” Coté said.

Foscarinis said her group had identified more than 20 other city ordinances that could be affected by the ruling.

Mike Journee, a spokesman for the City of Boise, said Wednesday the city was still reviewing the 9th Circuit’s ruling and it was “not ready to address” how its ordinances would be affected. Journee said the city could ask the full 9th Circuit court to review the panel’s decision, or appeal the ruling to the Supreme Court.

“We’re taking a closer look at that and seeing how we go from here,” Journee said.

The six homeless people who were the plaintiffs in the Boise case have all lived in or around Boise since 2007, according to the 9th Circuit panel’s opinion, written by Judge Marsha S. Berzon. They were all convicted of violating city ordinances between 2007 and 2009, when they sued.

Berzon said in the opinion that Boise has a growing homeless population. The city has three homeless shelters, which are routinely at capacity.

The shelters have time restrictions of when homeless people can check in and how long they can stay. At two of the shelters, individuals are not allowed to return to the shelter for at least 30 days unless they complete an “intensive, Christ-based residential recovery program,” according to Berzon’s opinion.

At least one of the homeless people suing the city declined to enter that program because of his religious beliefs, and he was then cited for violating a city ordinance when he was sleeping outside.

The opinion acknowledged that the city of Boise has rules that direct the police not to cite homeless people if they are sleeping outside when the shelters are full. But it states that people “could still be turned away for reasons other than shelter capacity, such as for exceeding the shelter’s stay limits, or for failing to take part in a shelter’s mandatory religious programs.”

The case had been closely watched, and in 2015, the Justice Department under President Barack Obama filed a statement of interest in it, stating that “punishing conduct that is a universal and unavoidable consequence of being human violates the Eighth Amendment.”