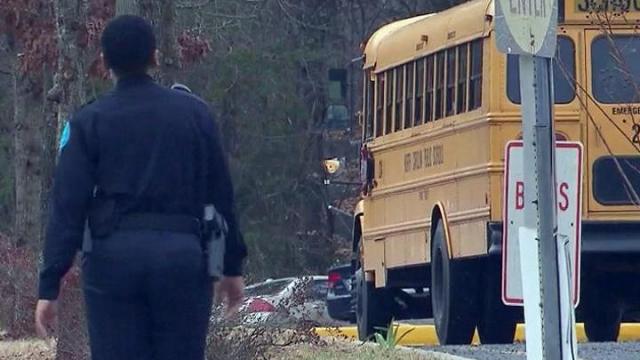 By Laura Leslie and Bruce Mildwurf

Raleigh, N.C. — One hundred days after 20 students and six faculty members were gunned down at Sandy Hook Elementary School in Newtown, Conn., a bipartisan group of North Carolina House lawmakers is backing an ambitious bill to improve school safety in this state.

House Bill 452 would spend $34 million over the next two years to improve emergency planning, crisis response and prevention in schools around the state.

"We've been very fortunate in this state of North Carolina that we haven't had such incidents, but it does not mean we are not immune to that," said Rep. Marvin Lucas, D-Cumberland.

Rep. Rick Glazier, D-Cumberland, called the proposal "the nation's most comprehensive response not only to Newtown but to the issues of school safety that have been there for quite some time."

About $20 million would be earmarked over the next two years to add school resource officers to middle and elementary schools and to pay for additional training for officers already on staff.

Rep. Bryan Holloway, R-Stokes, said it's currently up to each district to decide whether resource officers can carry weapons. The bill doesn't specifically address that issue.

Another $10 million would help local systems pay for more guidance counselors, psychologists and social workers. It also requires school counselors to spend most of their time counseling rather than on other duties like proctoring tests.

"Although we sometimes focus on incidents like Sandy Hook, the vast majority of threats to schools aren't external – they're internal," said Glazier. "The more folks we have gaining that intel in the school and being able to respond, (the better)."

The final $4 million would be set aside to install panic buttons or similar alarms, directly connected to local law enforcement, in every classroom in the state by July 2015.

The legislation includes a long list of other proposals, including anonymous tip lines for each school, more comprehensive emergency plans for each school and district and a crisis kit at each school containing first aid supplies and communications devices.

Each school would also be required to give its local law enforcement agency schematic drawings of the school, showing all exits, as well as master keys to open the front and back doors of the buildings.

"This could be pioneering legislation," said Rodney Ellis, president of the North Carolina Association of Educators. "They're actually providing resources here. It's putting meat on the bone, for a lack of a better word.

"It gives us something we can really grasp on to and makes sure that we are providing safety measures that will help keep our students safe in our schools," Ellis said. "I think it's good stuff."

Rep. John Faircloth, R-Guilford, a retired police chief and co-sponsor of the bill, said it's the best proposal he's seen anywhere in the country so far.

"There will be some smiles and sighs of relief across North Carolina," Faircloth predicted.

The proposal has the backing of teachers' groups, school administrators and law enforcement groups. it also has the support of the House leadership, where its strong bipartisan sponsorship makes it likely to win approval.

Holloway said Speaker Thom Tillis asked him to assemble a team to write the legislation. "An issue like this is when you've got to take your partisan blinders off," Holloway said.

Holloway said he hasn't yet discussed it with Gov. Pat McCrory or the Senate, but he's "confident" it will move forward.

McCrory recently created the North Carolina Center for Safer Schools to examine the best school security programs across the nation and determine which fit best in school districts statewide.

The legislation could get its first hearing in the House Education committee as soon as next week.