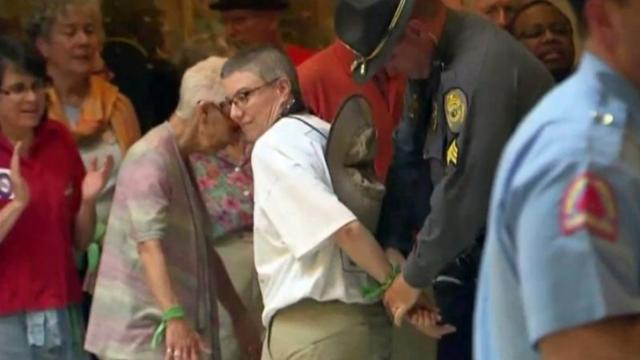 Raleigh, N.C. — A hastily called committee voted Thursday to pass new rules for citizens' use of the Legislative Building – just in time for planned protests next week.

The rules haven't been updated since 1987. The Legislative Services Commission, which sets the rules, hasn't even met since 1999. Rep. Larry Hall, D-Durham, said he and other commission members weren't officially appointed until Wednesday.

Democrats say the rule changes are a blatant attempt to keep protesters in the "Moral Monday" movement out of the building. Republicans say the update was needed because of recent court rulings in Moral Monday arrest cases from last year.

Some of the changes address old rules that judges have ruled unconstitutional, such as a prohibition on hand-held signs in the building. A judge ruled the ban was a content-based restriction on speech, which violates the First Amendment. Another discarded rule bans the public from the second floor of the Legislative Building.

Other changes, backers say, are simply a reflection of current practices, such as the codification of the reservation procedure for groups wishing to protest at the front of the building.

But there are additional changes that go further.

Under the new rules, any group making enough noise to interfere with conversation at normal conversational levels is creating a "disturbance." Singing, clapping, shouting and using a bullhorn are offered as examples of disturbing behavior. All were common during Moral Monday protests in the building last summer.

The new rules also allow police or staff to order people to leave the building if they think those people pose an "imminent threat" of a disturbance, even if they haven't done anything. If the visitors don't leave, they can be arrested and charged with a misdemeanor. The term "imminent threat" isn't defined in the rules.

Commission Chairman Rep. Tim Moore said "common sense" would have to be used in enforcing the rules, but he said the legislative building would continue to be "the most open building in state government."

Moore, R-Cleveland, said the changes provide full public access to citizens while allowing other citizens to lobby their legislators and ensuring that the lawmakers and their staff can carry on with their work.

"We can't allow situations where folks would crowd the doors and keep folks from getting onto the House floor or the Senate floor," he said.

The committee voted 7-3 to approve the new rules, with both Democrats and one Republican voting no. The changes take effect immediately.

Hall, the House minority leader, blasted the rule change as a partisan ploy.

"Everybody knows what the rush is. Change this and try to limit people participating in petitioning their government this short session," he said.

"This is limiting people’s ability to have their voices heard," he said after the meeting. "They elect us. We work for them. It’s not the other way around. This isn’t 'Our House,' it’s the 'People’s House.'"

Moore denied that the changes were aimed at the Moral Monday protests, which are expected to resume on Monday evening.

"Folks can gather all around this building anywhere they want. In fact, it’s good to see people here. That’s not what this is designed to do," he said. "Folks will still be here protesting on Monday. They’ll be able to protest lawfully in the way they’ve done in the past. The issue with the Moral Monday protest for the few that got arrested was that they were in an area creating a disturbance at a particular time."

But Joyner said the new rules do appear to restrict how and where groups can come into the building.

"If you have a group above 200 people, what is the disposition? Can they not come in? Can they not use the chamber? Can they not walk through and observe what’s going on?" he asked. "The Constitution doesn’t limit citizens to just come in as individuals.