Congresswomen 'squad' respond to Trump's attacks: The US 'belongs to everyone' 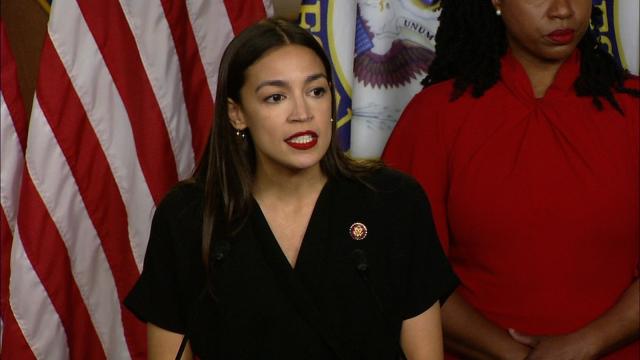 CNN — After the President of the United States spent the day openly encouraging a group of critical congresswomen of color to leave the country, the four Democratic lawmakers made clear Monday they're here to stay.

"I want to tell children across this country is that no matter what the President says, this country belongs to you," said Rep. Alexandria Ocasio-Cortez of New York at a news conference on Capitol Hill on Monday. "And it belongs to everyone and today that notion, that very notion was challenged."

Ocasio-Cortez was joined by Reps. Ayanna Pressley of Massachusetts, Ilhan Omar of Minnesota and Rashida Tlaib of Michigan, a group shorthandedly referred to on Capitol Hill as the "squad," a quartet of lawmakers who throughout their first months in Congress have found themselves at odds with leaders in their own party as well as sharply criticizing the President.

The four lawmakers' response Monday was a serious condemnation of a President who through a series of racist tweets and remarks made false allegations about the Democratic women and said that if they were going to criticize his policies, then they can remove themselves from the country. The squad's unified reply Monday night was one of defiance.

"Our squad is big," Pressley said. "Our squad includes any person committed to building a more equitable and just world, and that is the work that we want to get back to and given the size of this squad and this great nation, we cannot, we will not be silenced."

Omar condemned the President's Twitter attack against the freshmen congresswomen as "a blatantly racist attack on four duly elected members of the United States of House of Representatives, all of whom are women of color."

Omar went on to say, "This is the agenda of white nationalists, whether it is happening in chat rooms or it's happening on national TV, and now it's reached the White House garden."

On Sunday, the President used racist language to attack progressive Democratic congresswomen, falsely implying they weren't natural-born American citizens; Omar was the only member of the four not born in the United States. On Monday, Trump stood by his racist attacks on the quartet of Democratic congresswomen, insisting they leave the United States if they continue complaining about his policies.

As she had done before Trump's tweets this weekend, Ocasio-Cortez sharply rebuked Trump's handling of the crisis at the southern border.

"Weak minds and leaders challenge loyalty to our country in order to avoid challenging and debating the policy," she said.