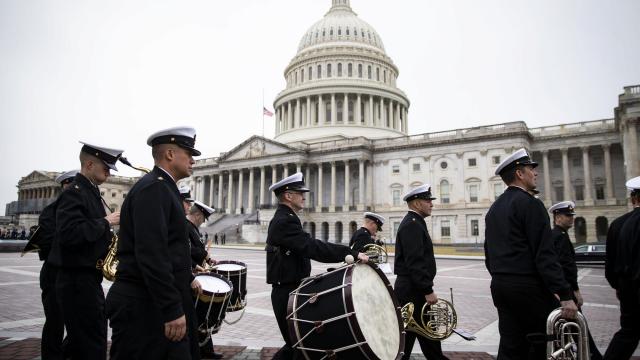 WASHINGTON — Lawmakers were discussing Sunday a short-term spending bill that would avert the possibility of a partial government shutdown as Washington mourns former President George H.W. Bush, according to people familiar with the talks.

Staring down a Friday deadline with major conflicts left to resolve, lawmakers had expected to be engaged in fierce bargaining this week over a longer-term spending package that President Donald Trump has said must include funding for a border wall.

But as the nation’s attention turns toward the former president, who died Friday and is set to lie in state in the Capitol Rotunda through Wednesday morning, a bill that delays the deadline for one or two weeks would allow them to set aside negotiations and pay respects to Bush.

Trump, who ordered “all executive departments and agencies” of the federal government closed Wednesday in a gesture of respect, said he would most likely approve such a bill.

“If they come — which they have — to talk about an extension because of President Bush’s passing, I would absolutely consider it and probably give it,” Trump told reporters on Air Force One on Saturday.

Many lawmakers are also expected to attend Bush’s state funeral at Washington National Cathedral on Wednesday, which Trump designated a national day of mourning.

Before Bush’s death, lawmakers were already considering a short-term spending bill or a one-year stopgap bill that would maintain this year’s funding level for the Department of Homeland Security without fulfilling the president’s demands for billions of dollars for a concrete wall at the southern border.

The wall, a Trump campaign promise that Republicans have tucked into border security funding, has been by far the most contentious roadblock in the negotiations to keep the remainder of the government fully funded. Though a shutdown would be relatively minor compared with previous instances because Congress has already passed bills to fund much of the government, it would still hinder a number of federal agencies, including the Department of Homeland Security, the Commerce Department and the Internal Revenue Service.

The president, ever unpredictable, has vacillated in interviews and brief exchanges with reporters between seeming to welcome a partial government shutdown and considering other options proposed by Congress. Few lawmakers in either chamber, however, are willing to let the spending fight delay their departure for the year.

For Republicans ceding control of the House to Democrats come January, the seven remaining appropriations bills serve as the last foreseeable opportunity to ensure that Trump has the wall money he once promised Mexico would provide.

But Democrats, with their support needed to overcome the 60-vote threshold in the Senate and with a House majority just a month away, see no reason to acquiesce to Republican demands. And a stopgap spending bill that goes into January would allow for Rep. Nancy Pelosi of California, the Democrats’ nominee for House speaker, to control the issue in the House and dictate the terms of any future border security funding.

In the Senate, lawmakers indicated last week that they would probably reject a compromise offer from House Republicans that would have given Trump the $5 billion he has insisted on for his border wall. Sen. Richard C. Shelby, R-Ala. and the chairman of the Senate Appropriations Committee, had floated the possibility of allocating $5 billion over two years as a way to reconcile Trump’s demands with those of Democrats.

But Sen. Chuck Schumer of New York, the Senate minority leader, and other Democratic lawmakers have vehemently denounced the notion of providing $5 billion, arguing that the bipartisan Senate bill’s $1.6 billionallocation for fencing was more than adequate for enhanced border security.

“This is the president trying to manufacture a shutdown to fire up his base,” Schumer said on the Senate floor last week. His chamber’s bill or a yearlong stopgap spending bill were the only options, he said, that would be successful in this Congress.

Even some Republicans in the Senate have appeared to balk at the price for a wall. Sen. Lisa Murkowski of Alaska, a frequent Republican foil for the president’s agenda, told reporters that she had yet to see a reason for an increase to $5 billion other than “that’s what the president wants.”

The $1.3 billion previously allocated in spending bills for border security — including for pedestrian fencing — has also not been fully spent, lawmakers and aides said.

The president is still scheduled to meet with Schumer and Pelosi, the House minority leader, on Tuesday morning, according to a person familiar with the lawmakers’ schedule. A little more than a year ago, the two Democratic leaders emerged from a similar meeting trumpeting an immigration compromise as part of a budget deal — a solution that ultimately fell through.

Details of a bipartisan agreement on major farm legislation, however, are still expected early this week, according to people familiar with the negotiations. The four lead negotiators from the House and Senate announced an agreement last week, but withheld details until a final version was complete.

Lawmakers, however, have indicated that it probably resembles the bipartisan Senate version, disposing of new, stricter work requirements passed by the House that would be imposed on able-bodied Americans seeking food stamps. Trump and other conservative Republicans had promoted the requirements, but Rep. K. Michael Conaway of Texas, the Republican chairman of the House Agriculture Committee, said he was confident the president would endorse the legislation.

“I have every expectation he will,” Conaway told reporters. “I have no indication he won’t.”