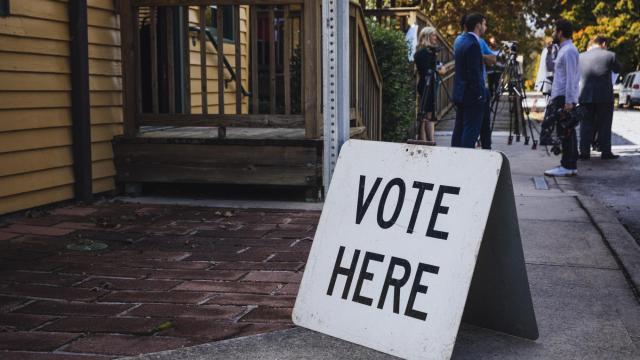 DECATUR, Ga. — Election Day was three weeks in the past, and Kenneth Royal, a 37-year-old salesman who supported Stacey Abrams for governor, could have spent the chilly Wednesday evening at home, putting politics out of his mind.

Instead, Royal, stung by Abrams’ narrow defeat, was manning a phone bank, trying to persuade fellow Democrats that the runoff election next week for Georgia secretary of state was not some obscure postscript, but a crucial battle over minority voting rights.

The issue of whether the state’s elections are managed fairly grabbed hold of Georgia in the midterms, and has not let go. Brian Kemp, the Republican who ran for governor while still serving as secretary of state, oversaw voting roll purges, registration suspensions and an Election Day rife with problems — all of which, critics said, were meant to suppress minority voting.

Like many Democrats around the country, Royal believes that those tactics worked, and essentially cheated Abrams out of victory in an excruciatingly close race. And he sees the coming race for secretary of state as a way to set some things right.

“Was it stolen? I think it was,” Royal said of the election. “What I’m thankful for is that we’ve been able to shed light on what’s been going on for a long time.”

Kemp and other Republicans brush aside such views as the complaints of sore losers, and say their policies protect the integrity of elections. Kemp will be sworn into office in January. Democrats preparing for the runoff, meanwhile, may find it difficult to rekindle the passion that animated Georgian voters for the general election Nov. 6, when some 3.9 million ballots were cast.

Even so, the party hopes to add Georgia to a string of victories in secretary of state contests this year, including three states — Arizona, Colorado and Michigan — where Democrats flipped control of the office, with promises to expand the franchise and protect voter rights.

Democrats regard those gains as crucial to their broader effort to reverse what they see as an erosion of voting rights across the country at the hands of Republicans.

In Congress, where Democrats will take control of the House in January after sweeping victories in the midterms, party leaders have vowed to give electoral overhaul measures a top priority. Bills are planned to make voter registration automatic across the country and to revive provisions of the Voting Rights Act of 1965 that were gutted by the Supreme Court in 2013.

Democrats also thwarted a bid for governor by Kris Kobach, the Kansas secretary of state known for pushing restrictive voting policies that were often struck down in court.

But it was the Georgia governor’s race this year that most angered, and galvanized, the U.S. left, which has portrayed Kemp, a businessman and ally of President Donald Trump from Athens, Georgia, as a vote-suppressing villain.

Kemp, 55, points to the introduction of an online voter registration system and the substantial growth in the number of registered voters on his watch as evidence that he has made it easier, not harder, for the state’s citizens to register and vote.

Those arguments have done little to stem liberal outrage. Outspoken actor Alec Baldwin recently urged people on Twitter to consider Kemp’s election “illegitimate,” and musician Chance the Rapper encouraged his Twitter followers Tuesday to get behind the Democratic candidate in the runoff for secretary of state, John Barrow.

Abrams, who emerged from the election as a liberal star, has also begun putting that star power to work for Barrow, though they come from opposite points of the party compass: She is 44, black, and unabashedly liberal; he is 63, white, and studiously centrist.

In TV ads, Barrow leans on a fence in front of a bucolic Georgia landscape and declares, “Yeah, I’m a Democrat, but I won’t bite you.”

His Republican opponent, Brad Raffensperger, a state House member and a civil engineer, also lacks a certain bite: Even allies describe him as long on intelligence and short on charisma.

After Election Day, the Abrams camp declined to declare an end to the campaign for 10 days, hoping to find enough votes among provisional and absentee ballots to force a runoff in the governor’s race. When Abrams finally acknowledged that Kemp had won, she said Georgia had suffered an “erosion of democracy” under Kemp.

That same day, she said that she would work to support Barrow in the secretary of state runoff, calling him “a man of principle and goodwill who will administer his responsibilities for the people — not his party.”

Since then, she has raised money for Barrow and recorded a radio ad for him. “I won’t stop until we guarantee a fair fight for future elections,” she says in the ad. “The other side thinks we’ve given up — that because I didn’t win, we won’t come back out. Let’s prove them wrong.”

Kemp has also weighed in, with an email to supporters Wednesday asking them to help finance ads supporting Raffensperger. Kemp said that Barrow would “implement radical left-wing policies that undermine Georgia elections” and help Democrats “turn Georgia into the next California.”

Barrow probably enjoys greater name recognition than Raffensperger, and that is partly the fault of Republicans, who repeatedly redrew the boundaries of Barrow’s district during his 10-year stint in Congress, which only served to widen his exposure.

Raffensperger will probably benefit from a recent Twitter endorsement from Trump and from the fact that low-turnout runoff elections in Georgia tend to favor Republicans, according to Kerwin Swint, a political-science professor at Kennesaw State University.

Raffensperger, a former city councilman from Johns Creek, an affluent Atlanta suburb, did not respond to an interview request, and he backed out of a scheduled debate this week, leaving Barrow to talk next to an empty lectern.

In other campaign appearances and on his website, Raffensperger has said that his main concern is the danger that immigrants living in the country illegally might cast ballots. “I’m running for secretary of state to make sure that only American citizens are voting in our elections,” he said in a debate earlier this month.

Both candidates say Georgia’s obsolescent voting machines need to be replaced. But Barrow, in an interview, attacked his opponent for wanting to stick with other aspects of the status quo from Kemp’s tenure.

“He’s defending the system that purges voters in ways that are highly inaccurate,” Barrow said. “His way of updating the voting rolls will actually degrade the voting rolls. I want to do it with information that’s accurate.” Barrow criticized the state’s “exact-match” system, which left tens of thousands of new voters in a kind of administrative limbo before the Nov. 6 election. He said it was “totally unacceptable” for the state to place voter applications in “pending” status just because of “trivial inaccuracies” that cause mismatches with other official databases.

He was also critical of the state’s “use it or lose it” provision, which drops people from the voting rolls if they have not voted in several consecutive elections.

But Barrow differs with Abrams’ supporters over some of the measures they are seeking in a federal lawsuit filed this week, calling for sweeping changes to the state’s election system.

Notably, the lawsuit calls for the reimposition of federal oversight over any changes to Georgia’s election procedures, which used to be required under the Voting Rights Act. Barrow said that such oversight would best be handled by the state.

Swint, the political scientist, noted that there were limits to the power that secretaries of state can wield in Georgia. “They apply election law; they don’t make election law,” he said. Even so, he noted, the post can serve as a springboard to the governor’s mansion, as it was for Kemp.

If Barrow wins Tuesday and Abrams decides to run for governor again, the state’s 2022 primary could see a showdown between two Democrats with very different ideas about how to win. And Abrams may learn then exactly how much bite Barrow has.