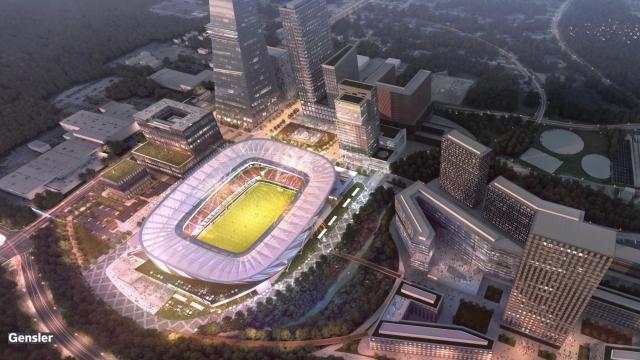 Raleigh, N.C. — Developers looking to put a mixed-use project anchored by a 20,000-seat soccer stadium south of downtown Raleigh continued to press for public funds for their proposal on Friday.

"This project alone will not happen with just private [money]. We need public, we need government, we need a partnership that basically says how do we look at this as a region and make this a success for all in Raleigh," said Douette Pryce, a Florida real estate consultant who was on the nine-member ULI team.

ULI is a nonprofit research and education organization with a stated mission of providing "leadership in the responsible use of land and in creating and sustaining thriving communities worldwide."

The team presented its 96-page report that labeled the Downtown South project "a rare opportunity" to transform about 130 acres north of Interstate 40 between South Saunders and Wilmington streets "into a vibrant gateway to the city and an economic investment that benefits all."

How big is Downtown South at $1.9B? 10 PNC Arenas, 20 RBC towers, even more than most pro stadiums

In addition to the soccer stadium, which Malik hopes will help bring a Major League Soccer team to the Triangle, the $1.9 billion development would include 1.7 million square feet of office space, 125,000 square feet of retail and commercial space, hotels with 1,200 rooms total and convention center space and about 1,750 apartments, condominiums and townhouses targeting a range of incomes.

Concerts, e-sports events, festivals and collegiate sports could also be held at the stadium to generate revenue, according to the report.

The report projects Downtown South would be built in phases over the next decade, and it gives an overview of pluses and minuses for the project, from I-40 and a rail line that crosses the property to the lack of a direct link to downtown Raleigh to possible gentrification of neighborhoods in southeast Raleigh.

It also draws on downtown developments nationwide to provide a glimpse of the potential for the project, noting it could generate thousands of jobs and become a new destination for locals and tourists alike with sports and entertainment, outdoor art, greenways and walkable, high-density neighborhoods.

The developers plan to foot more than $1.6 billion of the cost through debt and their own equity in the project, according to a financial breakdown in the report. But it also called for $239 million in tax-increment financing – a special district carrying a higher tax rate would be drawn around Downtown South, with the extra tax revenue going to pay off development costs – $45 million in city and county hotel and restaurant tax money and other federal, state and local funds for affordable housing and transportation.

Kane has said a lack of public funding would be a deal-breaker for the project.

"We’ve got to have funds to build the stadium," he said when the project was announced in June, "and the stadium is the stimulus for this whole project to work."

Kane said he has talked with investors who are interested in backing the project and that progress so far is in line with plans to break ground in 2020 if agreements are made on funding.