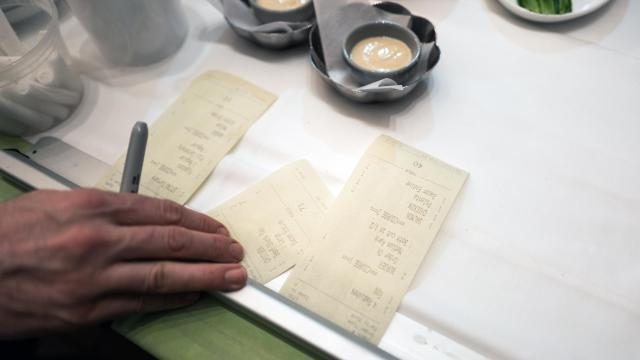 The Trump administration is moving to give restaurants and other employers more control over workers’ tips. But critics have denounced the plan as legalizing wage theft and accuse the administration of suppressing evidence that lends credence to the charge.

In December, the administration announced a proposal to undo portions of a 2011 regulation that blocked employers from collecting tips and distributing them to anyone other than the workers who customarily receive them.

Under the new proposal, for which the public comment period ends on Monday, employers could use workers’ tips for essentially any purpose, as long as the workers were directly paid at least the federal minimum wage of $7.25 an hour.

The restaurant industry, which has fought the Obama administration regulation for years, argues that the change would allow employers to share the tips of waiters and waitresses with so-called back-of-the-house workers like cooks and dishwashers.

“We think it’s unfair for a busboy who picks up dirty dishes to be able to get tips but for a dishwasher who cleans the dishes not to be allowed to share the tips,” said Angelo Amador, senior vice president and regulatory counsel at the National Restaurant Association.

But labor advocacy groups and former Obama administration officials argue that the regulation would legalize a vast income transfer from workers to employers, who would be permitted to pocket the tips.

“There is a lot of wage theft, tip stealing in restaurants and other sectors where workers depend on tips,” Christine Owens of the National Employment Law Project said. “This would be one more reason for employers to take workers’ tips and do whatever they want to do with them.”

North Carolina Attorney General Josh Stein and the attorneys general of 15 other states and the District of Columbia wrote to Labor Department officials on Monday to register their opposition to the change.

"Restaurant servers and bartenders work hard for their tips," Stein said in a statement. "When customers leave a gratuity, they expect that money to go to the workers, not the owners. I oppose this U.S. Department of Labor rule because owners shouldn’t pocket their servers’ tips."

A study by the Economic Policy Institute, a left-leaning think tank, estimated that the change would cost current tipped workers $5.8 billion a year in pay. It cast doubt on the idea that employers would use the money to compensate other workers better.

Heidi Shierholz, a former chief economist at the Labor Department who oversaw the study, said that under standard economic theory, employers were unlikely to pay workers more than needed to attract and retain them, which they are by definition already doing in most cases.

She predicted that if the regulation took effect and employers decided to share tips with these workers, “their base pay would be reduced and there would be no more take-home pay.”

The Labor Department estimated that the rule would affect about 1 million waiters and waitresses and over 200,000 bartenders. Workers in other industries, like hairstylists and manicurists, would also be affected.

Many tipped workers would not be affected, however, because the law would continue to prevent employers from taking the tips of those who earned less than the minimum wage. The law allows workers to be paid below the minimum wage as long as their tips make up the difference.

The proposed rule has generated a surprising amount of attention, attracting more than 180,000 comments from the public by Friday. That is roughly two-thirds the number of comments that the Obama administration’s proposal to increase overtime eligibility — which affected millions more workers and nearly every industry — generated after it was formally unveiled in 2015.

At least one major business group and some restaurant owners wrote that the rule would allow employers to put in place new pay practices that benefited both them and workers. “It used to be that our servers typically made 1.5 to two times more than our kitchen staff, which is a big gap, but now they make two to four times more,” wrote Kim Snuggerud, who owns the Hilo Bay Cafe in Hawaii. “This gap can be better managed with this change in the regulations. The wage disparity creates many problems, from morale issues to higher turnover.”

In an interview, Snuggerud emphasized that she was not a supporter of President Donald Trump and tended to favor minimum-wage increases and “big government.”

But many self-identified former restaurant owners, along with many workers and customers, wrote in to oppose the rule, saying it was unfair and might even amount to theft.

Adding to the controversy is the Labor Department’s failure to include a numerical analysis of the costs and benefits of the rule when it formally released the proposal. A long-standing executive order typically requires such an analysis for regulations that would have an economic impact of at least $100 million.

“When you put out a proposed rule, you have to put out the analysis you have that shows the impact of it,” said Sen. Patty Murray, D-Wash., the top Democrat on the committee that has oversight over the department. “I think, frankly, if they do that, people would be outraged.”

When it released the proposal, the department said that the omission was the result of “a lack of adequate data and the speculative nature of determining how employers, employees and customers would all react.”

But several former Labor Department officials said that while uncertainties and data limitations complicated any effort to measure costs and benefits, economists had well-established practices for addressing them.

“There are assumptions one has to make, but you build that into the analysis,” said David Weil, the former head of the division that enforces minimum-wage and overtime rules, which also produced this proposal. “On its face, it’s just a ridiculous assertion.”

Shierholz said it had taken her team of four primary researchers less than two weeks to generate their estimate.

A Labor Department spokesman said that the department had sought public input about how to estimate costs and benefits when it released its proposal and that it “intends to publish an informed cost-benefit analysis as part of any final rule.”

The spokesman pointed out that the 2011 rule also did not include a detailed cost-benefit analysis, though former Labor Department officials say that was because the rule codified existing policy and did not change policy.

On Thursday, Bloomberg Law reported that the department had, in fact, produced an economic analysis, but that Labor Secretary Alexander Acosta and his aides had chosen not to release it after it showed that the cost to tipped workers could be substantial.

The department declined to comment. But two former Labor Department officials said they had been briefed on the analysis by people currently at the department and echoed this account. Michael Hancock, another former top official in the division that produced the proposal, said he found it unimaginable that the department would not have produced an economic analysis because officials at the Office of Management and Budget, who must typically sign off on new regulations, would refuse to do so without one.

“At least during my time, OMB jealously guarded the executive order,” said Hancock, who worked at the department for two decades beginning in 1995. “They always insisted if it’s even close to the threshold that you’ve got to do an economic analysis, no matter how challenging.”

The restaurant industry contends that the Obama-era regulation is illegal because it goes beyond what the underlying law supports. It asked the Supreme Court to review the Obama rule after appellate courts in different parts of the country split on the issue.

“I would say the process was not followed in 2011,” Amador said. “If there’s any flaw here, it’s that an illegal regulation passed in 2011.”

But Hancock said the proposed change would be highly vulnerable to a legal challenge if completed because omitting an economic analysis denied the public a chance to comment.

“The rule-making process is designed to give the public an opportunity to have their voices heard,” he said. “If you don’t include the economic analysis that underlies all of this, the public never had an opportunity to do that. I think it’s going to create legal problems.”