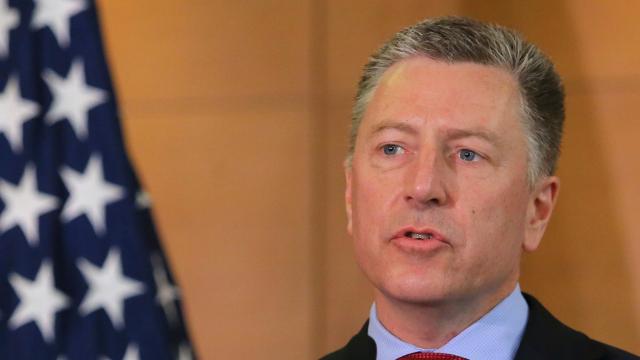 CNN — Former US Special Envoy for Ukraine Kurt Volker appears Thursday before three congressional committees -- the first official to testify on explosive whistleblower charges that President Donald Trump tried to pressure Ukraine to investigate his Democratic rival Joe Biden, an effort the White House then worked to cover up.

A longtime Republican foreign policy expert who was seen in the White House as not fully "on the Trump train," Volker is now at the center of the impeachment inquiry examining allegations Trump deployed the machinery of state in a vendetta to target political rivals.

Volker's testimony, analysts say, could be damaging to the President and his allies.

Volker is seen as "a well-respected straight shooter who is likely to testify in ways that will damage other Trump allies," Ian Bremmer, president of the Eurasia Group, wrote in an emailed analysis. "It's possible others, including key administration members like Secretary of State Mike Pompeo and Attorney General William Barr would also be forced out."

Volker is also one of the State Department witnesses whose depositions to Congress Secretary of State Michael Pompeo tried to block, setting off a tussle with lawmakers who say they will interpret any effort to prevent the officials' appearances as obstruction.

Where will Volker appear and why?

Volker is now set to testify before the Intelligence, Oversight and Reform and Foreign Affairs committees behind closed doors.

The announcement about his appearance came just hours before Volker resigned from his State Department position Friday, following release of the whistleblower complaint and a White House transcript of Trump's July 25 call with Ukrainian President Volodymyr Zelensky.

In that call, Zelensky made clear that Ukraine, vulnerable and weak in the face of Russian aggression, wanted to buy American anti-tank missiles. Trump answered: "I would like you to do us a favor though."

Trump pushed Zelensky to work with his personal lawyer Rudy Giuliani and Barr to investigate former Vice President Joe Biden and his son, Hunter, who had business dealings in Ukraine. There is no evidence of wrongdoing by Joe or Hunter Biden.

Trump also urged Zelensky to find a Democratic National Committee computer server that the US intelligence community says was hacked by Russian intelligence during the 2016 election campaign. There is no evidence Ukraine had any involvement in the hack.

The whistleblower complaint said that a day after Trump's call, Volker and the US ambassador to the European Union, Gordon Sondland, met with Zelensky and provided advice about how to "navigate" Trump's demands.

A source familiar with Volker's thinking said he was trying to get the Biden-Giuliani issue off the table, given that it was a political effort and not one that he was meant to support in his State Department role.

Volker did not want the controversy to occupy the center of bilateral conversations either, the source said, and hoped that in connecting Giuliani with Yermak, it would lead to a conversation in which the Ukrainians would agree to look into the matter and it would eventually fizzle out in two or three years.

Giuliani, meanwhile, has repeatedly claimed that these meetings were arranged at the State Department's request, pointing to Volker as the official who reached out to arrange them and showing text exchanges on television to back up that claim.

In one of the texts Giuliani released, Volker is quoted as suggesting a phone call with Yermak and Giuliani. It is unclear just how involved Volker was with Giuliani's political efforts.

But Giuliani has directly pursued Ukrainian investigations into American politics and Trump's leading political rival Biden at least since the spring.

The former New York mayor has pushed for a probe into the call Biden made in 2016 -- alongside the European Union, International Monetary Fund and others -- for the removal of Ukraine's top prosecutor, who at one point had been investigating a Ukrainian natural gas company that had Biden's son, Hunter, as a board member.

The prosecutor wasn't seen as tackling corruption aggressively, a key requirement for Ukraine to be considered for membership in the European Union.

In May, Giuliani floated traveling to Ukraine to meet with Zelensky in an effort to push the country to investigate Biden, as well as matters connected to the release of negative information about Paul Manafort, the former chairman for Trump's 2016 campaign. He ultimately reversed course and decided not to go.

In August, Giuliani said he had spoken to Yermak several times over the phone and met him in Madrid.

On Wednesday, the State Department inspector general provided Congress with dozens of pages of documents that included materials Giuliani had given the department earlier this year. Those documents, which were obtained by CNN, included the unsubstantiated claims about Biden and his son that formed the basis of Trump's accusations in his July call with Zelensky.

The whistleblower said in the complaint that in his understanding, Volker was trying to "contain the damage" inflicted on US policy by Giuliani and help Ukrainian officials "navigate" Trump's requests.

If Volker knows details of Giuliani's efforts, lawmakers will likely probe to learn as much as they can.

Volker is the executive director of the McCain Institute, which focuses on leadership, and kept that position even after being tapped in July 2017 by former Secretary of State Rex Tillerson to become special envoy to Ukraine.

He has served as an ambassador to NATO, a European and Eurasian affairs expert at the National Security Council, and a deputy assistant secretary of state for Europe and Eurasia. He got his start at the CIA as an analyst.

As representative, Volker has been at the heart of efforts to keep US military and economic aid flowing to Ukraine. He had also been the US point-man in trying to get dialogue started between Russia and Ukraine over the separatist revolt in eastern Ukraine, now in its sixth year.

In Kiev, Volker was seen as a reliable advocate. Yermak told CNN Saturday that Volker's "consistent and comprehensive support for Ukraine throughout his tenure means a lot for our country."

But almost a week later, Pompeo and the State Department have said nothing on the record about Volker's resignation.

Former Ukrainian President Petro Poroshenko tweeted that "one could hardly overestimate" Volker's contribution to strengthening of our strategic partnership" with the US.

A White House source has told CNN that Volker, an ally and protegee of prominent Republican Trump critic Sen. John McCain, never became a member of the President's inner circle. And according to another source, after Volker's resignation, there was little love lost for him inside the White House, where he was seen as "never fully on the Trump train."

In a letter to trustees of the McCain Institute on Saturday, Volker wrote that Congress had requested his testimony and he would "be complying with that request."