KURT STREETER: Simone Biles and the Power of 'No' 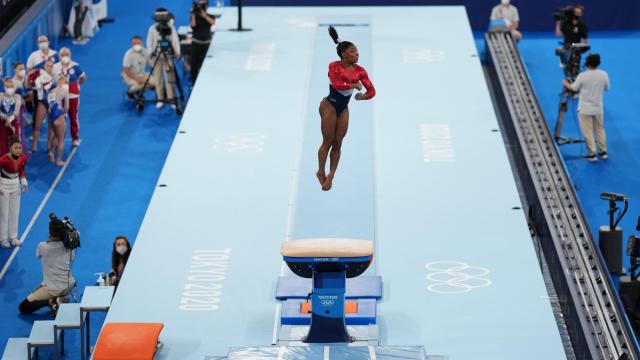 EDITOR'S NOTE: Kurt Streeter is a New York Times columnists in the sports section. and previously worked at ESPN and The Los Angeles Times.

What a small and simple word.

What transformative power it possesses.

Simone Biles used it to ultimate effect at the Tokyo Olympics this week.

“Today it’s like, you know what, no,” she said, explaining to reporters her decision to withdraw from the team gymnastics competition to protect her mental and physical health.

It was a “no” that shook the Olympics and put the sports world on notice. It also showed that athlete empowerment, a hallmark for this era in sports, continues to develop and grow. Athletes are more than ready to stand up now, not only for social justice but also for themselves.

Biles is the greatest, most decorated gymnast of all time. She won four gold medals in Rio five years ago and was expected to take home at least three more in Tokyo. But by saying “no,” bowing out this week, and standing up for her well-being in a sports world that commodifies athletes and prizes winning at all costs, she surpasses all of those achievements in importance.

Biles has thrown a wrench in the system. What that “no” says is really this: Enough is enough.

This was an act of individual resistance, putting up a firm wall between herself and the glaring burden of competition.

It shares a lineage with NBA and WNBA players announcing they would not play in the wake of police shootings and with her fellow Olympian Gwen Berry protesting during the national anthem from a podium.

Biles’ withdrawal from Tuesday’s team competition came on the heels of Naomi Osaka’s shocking upset loss in the Olympic tennis tournament. Osaka, of course, added meaningfully to the discussion about athlete mental health, and resistance against unaccommodating sports governors, when she withdrew from the French Open this spring.

Osaka lit the Olympic cauldron during the Games’ opening ceremony, signaling she was ready to step back into the limelight on her own terms. But the listless way she lost this week showed her expectations to be perfect were still burdensome.

If Osaka’s withdrawal from a Grand Slam tennis tournament was a body blow to a sports world bent on pushing athletes to their breaking point, then Biles’ decision to say “no” was a haymaker straight to the chin.

The Olympics — even these troubled Games, so muted and discomfiting that on television that they seem wrapped in cellophane — are a far bigger deal than the French Open. For all the tedious talk about them having nothing to do with politics, the Games’ deeply political symbolism is broadcast to a vast global audience. Every athlete in Tokyo carries national hopes as they perform.

Biles came to the Games clearly conflicted about gymnastics and the organizing bodies that rule the sports.

“I truly do feel that I have the weight of the world on my shoulders at times,” she wrote on her Facebook page, noting later that “The Olympics are no joke.”

This was not the bubbly Simone Biles who burst onto the world scene at the Rio Games.

This was an athlete coming into her own at age 24.

An athlete who pressed toward Tokyo instead of retiring, in part because it would force gymnastics officials to keep reckoning with what she and so many other American gymnasts had survived.

An athlete willing to speak with force about racism, a topic she knows well as a Black woman dominating a predominantly white sport.

So, yeah, she carries a heavy burden, one that falls hard on her and on other Black women athletes.

Everything seemed perfectly scripted for Biles to thrive in the face of that burden. She would stand up to the glare and win a bevy more medals, underscoring her competitive dominance, and then retire.

She surely could have predicted what came next. The usual howls from the knuckle-draggers who want sports and society to remain stuck in a past in which athletes never betray their stoicism. The braying critics — most of them seem to be white men, no surprise — who said she wasn’t a true champion because she didn’t suck it up.

None of this kept Biles from performing the most significant act of these Olympics.

We live in a society that simultaneously worships athletes like magical gods and treats them like disposable objects.

Fans, reporters, leagues, global organizations like the International Olympic Committee, all form an ecosystem in which too few care about the pain athletes endure — the broken bones, brain injuries and mental health woes. So long as they are there for our entertainment, it’s all good.

That’s why one of the most iconic Olympic scenes is of Kerri Strug in the 1996 gymnastics team competition. With Bela Karolyi prodding her to push through an ankle injury — “We need you one more time, for the gold!”—Strug did as she was told, sprinting toward the vault and sticking the landing. Then she hopped a few steps to face the judges and fell to her knees. Karolyi carried her to the medal podium to collect her gold.

The shadow of coaches like Karolyi, of team attendants like Nassar, of unbridled pressure to be perfect and grab gold medals amid a tsunami of pressure, hung over Biles.

She stood up to all of it and said “no.”

It was an act of resistance, simple and courageous, more powerfully important than anything we will see at these Games.