Raleigh, N.C. — Every year the North Carolina State Fair aims to tantalize your taste buds with new deep fried treats. During Monday's State Fair Media luncheon, the latest concoctions for this year's fair were unveiled and things are about to get sloppy...

The Krispy Kreme Bacon Cheeseburger made a splash at the fair several years ago, but this year it is all about the Krispy Kreme Sloppy Joe! This time a Sloppy Joe mixture topped with cheddar cheese will reside between two glazed doughnuts. Messy, but pretty tasty.

WRAL's Mix 101.5 FM's Lynda Loveland and Jim Kelly, 99.9 The Fan's Joe Ovies and Mark Thomas of 620 The Buzz all sampled this sandwich and the reviews were good!

On the deep-fried front, pink lemonade funnel cake and red velvet deep-fried Oreos topped with cream cheese are the latest twist on these fair staples. The funnel cake is a nice blend of sweet and tart, while the Oreos, which are deep-fried with a red velvet batter, were also a hit.

Two popular candies are also getting deep fried this year. Joining the traditional chocolate bars (Milky Way, Snicker's, Peanut Butter Cup, etc.) is the Sugar Daddy and Cow Tales. Each known for their chewy caramel consistency, deep frying them helps break that down a bit.

The Sugar Daddy must be consumed quickly before it has a chance to cool off and solidify - then it will just get stuck to your teeth. The stick is also kinda pointless on these since after being battered and deep-fried, it just breaks off under all the weight. So, pick it up and enjoy! But expect to need a toothpick after.

The Cow Tales are a perfect fit for deep-frying. The chewy caramel, which encircles a vanilla cream center, blends really nicely with the batter. Definitely not as heavy as other deep-fried snacks at the fair, but still mostly batter. 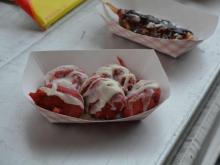 Some new rides occupying the midway this year include a new children's train ride dubbed the Gold Rush Express. Surf's Up will allow riders to stand up like they are riding a skateboard or surf board as they head down a track and over hills.

The Stampede, a take on the double Ferris Wheel, will be making its debut at the fair. It is coming straight from the factory to Raleigh, said Corky Powers, spokesman for Powers Great American Midways. This ride lets users face out as they spin in one of two wheels.

You might also notice some new performers roaming the fairgrounds. The Gantry Bike by Cirque Mechanics, K-9s in Flight dog show and Hansen’s Spectacular Acrobatic Sensations are among the new acts.

This year's state fair is also home to a new exhibit, Agriculture Today. Presented by the state's soybean farmers, this exhibit gives visitors have a hands-on learning experience through interactive stations. It will feature a 10-foot-tall soybean fountain , a biochemistry stage and a carnival-like information challenge. It will be located near Gate 11.