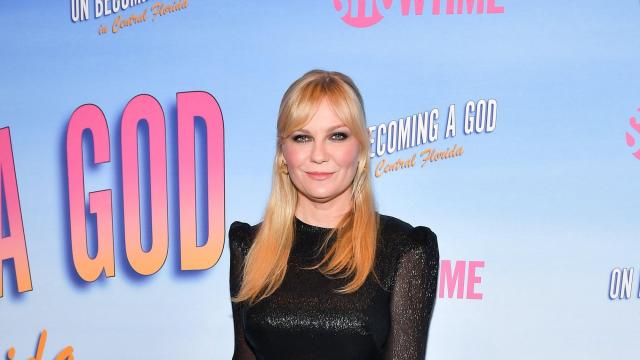 CNN — At this moment in the era of Peak TV, any old notions about major movie stars like Kirsten Dunst making a transition to television are kaput, with some of Hollywood's biggest names starring in groundbreaking series that are proving more challenging than much of what the big screen currently has to offer.

"I think doing movies is ten times easier!" insists Dunst, who previously appeared in the second season arc of the acclaimed series "Fargo" and is now an executive producer and star of the quirky, seriocomic new Showtime series "On Becoming a God In Central Florida. "We work pretty intensely...It was, like, never-ending -- and having a new baby, I really put myself in the hardest position I could right away...Like, the hardest work I've ever done."

And Dunst is no stranger to hard work, having launched her career as a child and appeared in several of the most admired films of the past quarter-century: "Interview with the Vampire," "Little Women," "Jumanji," "Wag the Dog," "Bring It On," Sam Raimi's "Spider-Man" trilogy, "Eternal Sunshine of the Spotless Mind," "Melancholia," "Hidden Figures" and an ongoing collaboration with filmmaker Sofia Coppola that includes "The Virgin Suicides," "Marie Antoinette" and "The Beguiled." But even a filmography as impressive as that left her unprepared for the rigors of making top-tier television.

"Doing a movie, I only have to prepare that one thing, those hundred and how many pages," says Dunst, who recently welcomed her first child, a son, with her fiancé and "Fargo" co-star Jesse Plemons. "Doing a TV show, I have to prepare every week. That's so much harder. I felt like all I did was go home, memorize lines, go to sleep, wake up, do it all again...It was pretty exhausting, I'm not going to lie!"

But she couldn't resist the allure of television, especially after having difficulty zeroing in on projects that appealed to her in terms of either art or commerce.

"For me after doing 'Fargo,' to be honest, the independent film is not really [still viable]," says Dunst. "People don't see it, and you don't make any money. You have a family and you need to make money. Television people see, and you make money and can do something creatively satisfying."

Luckily for Dunst, the quality she saw in "On Becoming a God..." kept her highly motivated.

"That pilot was so good," she tells CNN. "Between movies and TV, all of it, of what I've been reading to do, this was for me the best. The best fit for me and the best story."

She instantly responded to its distinctive vibe, which she characterizes as darkly humorous, Coen Brothers-esque, and fresh, unexplored universe.

"I just hadn't read anything like this," she adds. "I thought the subject matter was so interesting."

In the series, Dunst plays Krystal Gill, a working class Floridian mom in the 1990s whose husband Travis (Alexander Skarsgard) is obsessively consumed by a mass-marketed pyramid scheme/cult movement that promises untold wealth. When a bizarre tragedy topples Krystal's already economically fragile life, she decides to harness the power of the multilevel marketing movement to her own advantage, finally.

Such highly touted, get-rich-quick programs were pervasive in the '90s, and Dunst still finds it tricky to wrap her head around them in a contemporary context.

Krystal is a former local beauty queen, and Dunst was especially excited to wear an array of costumes that were picked sometimes for everyday appeal and sometimes for lowbrow Sunshine State razzle dazzle.

"We wanted them to be very authentic and not trendy for now, because the '90s are so trendy right now," she says of the wardrobe by Stacey Battat, another regular Coppola collaborator. "We stayed away from scrunchies or certain looks that are too cool, maybe. Also, because she doesn't have a ton of money and she just had a baby, we wanted to have the same few outfits and mix and match those. She's not a character that should have a new outfit in every scene."

Dunst wielded tremendous influence on the project, down to casting -- including the choice of Skarsgard, with whom she worked with in Lars Von Trier's intensely psychological 2011 film "Melancholia."

"He's such a goofy Swede and no one gets to see that side of him -- he's always cast as these really serious handsome dudes," she says. "Really, he's very funny. I hope that people see this and he gets some other types of roles."

She's been surprised to find just how challenging it's been to adapt to life as a new mother, even with all the advantages of professional success and a tight-knit support network of family and friends.

"Anyone who's a stay at home mom, that's the hardest job on the planet, 100% -- there is no question," she sighs. "The only time you get off is when they're napping, but then you're cleaning something. That's the age-old thing, but it's true. There is literally no self-anything. No self-care whatsoever, unless someone comes over and then you can take a shower."

Reminded that it's been 25 years since she had a particularly breakthrough run in 1994 with the releases of "Interview with the Vampire," in which she played an ageless bloodsucker eternally locked in a child's body, and "Little Women," as the 12-year-old youngest sister Amy Marsh, Dunst reveals that she's always been more present in her everyday existence than the illusory worlds she helped create.

Reflecting on "Vampire," the first thing that comes to mind isn't being a tween sharing scenes with Tom Cruise and Brad Pitt. "You know what I remember? How lame I thought it was that I had to get up, go to school, and then go to work after and work all night!" she exclaims. "I think the child labor laws were different then -- I definitely worked way longer hours than I probably should have. Getting up and having to do schoolwork and then go to work was awful to me. It's the worst!"

"I was not caught up in it or thought, 'I'm a movie star,' or anything like that. That's the farthest thing from my brain at that time," laughs Dunst. "To be honest, I thought, 'This is fun!' I didn't think anything beyond that, at that age. I remember being on the set of 'Little Women' and having a lemonade stand with Susan Sarandon's daughter. My memories are very child-appropriate memories."