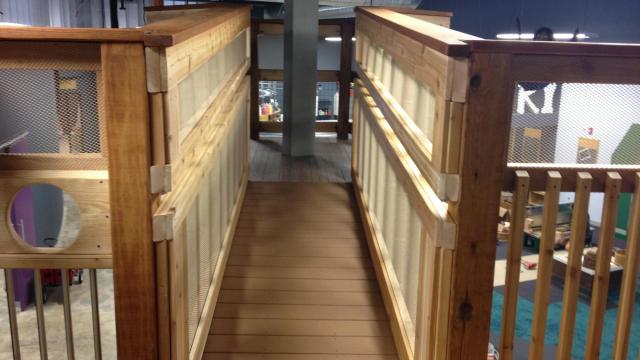 Kidzu Children's Museum in Chapel Hill welcomed its 300,000th visitor in October, thanks, in part, to its expanded location at University Place.

The museum, best for babies to tweens, opened its doors in a small space on Franklin Street in 2006. Since then, the museum has moved to several other spots in the town, but always kept the same focus - to provide a place for kids to learn, explore and play.

Kidzu took over its current space in University Place, formerly University Mall, earlier this year. At 8,500-square-feet, it's the largest location ever for the museum. And the bigger digs has meant more visitors - 50,000 since reopening seven months ago, according to a press release.

The new space includes a theater with working stage lights, a rock climbing wall, an indoor tree house that rises twelve feet off the ground and The Makery, a maker space for young children to create.

Kidzu will stay at University Place through 2018. Leaders are currently exploring other sites and partnership options for a future home.

“We offer something for everyone," said Tina Clossick, director of operations, in a press release. “Our most common ages are three to seven, but our exhibits are designed for as young as six months up to 12 years old. Our staff makes sure that visits are personalized by developing activities based on the individual child’s age or skill level."