Kids showing signs of eye damage from screen use

Raleigh, N.C. — Dr. Alice Lin, a pediatric ophthalmologist in Raleigh, has noticed a trend in her patients recently.

"Typically, we don't think of children as getting symptoms of dry eye where your eyes feel dry or they might feel scratchy or itchy or you may get some tearing because of it, but we are actually starting to see an increase in the amount of dryness, and we think it is related to excessive device use," Lin said.

So, she is recommending parents be more mindful about children using tablets and phones – not only how much time they are spending on screens but how close they are to the screens.

"When you're on a device, this seems to be more true for devices than things like books or newspapers, you blink less," Lin said.

Because the technology is relatively new, it's hard to know what kind of effect it will have as children who had access to iPhones as toddlers become young adults.

"It used to be no kids were on anything until probably 3 or 4, when they maybe start watching a little bit of TV, but now it's so pervasive," Lin said. 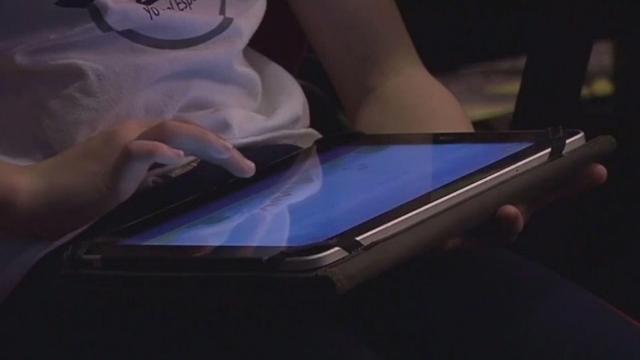 Sarah Hairston is a mother of two, with a 4-year-old son who wears glasses. She said she makes him earn his screen time, and they pay a great amount of attention to how his eyes are reacting.

"He has glasses because one eye already drifts, so we are wanting him to focus more on what is in front of him without drying out his eyes and without the flashing back and forth," Hairston said.

Some experts are recommending blue light filters or glasses that block out the blue light when using screens, but Lin said she is far from sold on that. She encourages good old-fashioned sunlight as a way to relieve the strain on young eyes.