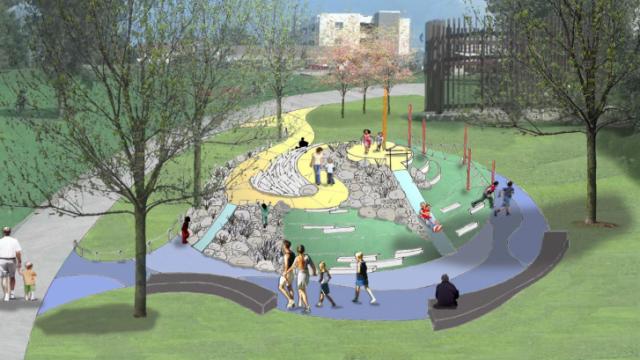 The nonprofit that manages Durham Central Park has launched an online campaign to raise $25,000 to build a new playground at the popular downtown park.

Requests from parents and families who wanted more places for kids to play at the park spurred the plans for the project. Right now, the park features a giant cardinal and turtle that kids can climb on. The park hosts the city's farmers' market, food truck rodeos and other community events.

As I wrote late last year, Mt. Merrill is named after Merrill Davis, whose family owns the neighborhood nursery and garden store, Stone Brothers & Byrd. Davis, who was one of the park's biggest supporters, died in a car accident in 2012.

Kickstarter is a crowdfunding platform. People who donate to Kickstarter projects get rewards in exchange for their pledges. Backers for the Mt. Merrill project get everything from a thank you and invitation to the unveiling event to prominent display of an individual or business' name or brand or tickets to Meals at the Market dinner.

For more information about the project and to support it, check out its Kickstarter page.