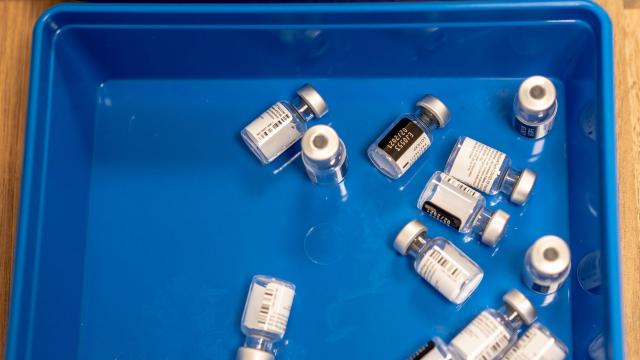 CNN — There's not much suspense going into Thursday's meeting of the US Food and Drug Administration's vaccine advisers, who will discuss emergency use authorization for Pfizer and BioNTech's coronavirus vaccine.

The EUA is widely expected and has been telegraphed with unusual frankness from the top of the FDA on down.

On Dec. 10, an FDA advisory panel formally recommended that the Food and Drug Administration authorize Pfizer’s COVID-19 vaccine for emergency use. The FDA gave final approval on Dec. 11, and shipments began throughout the U.S.

The first North Carolina healthcare workers were vaccinated Dec. 14. By Dec. 16, all hospitals were expected to receive their first doses at more than 50 hospitals across the state.

Staff and residents at the state's long term care facilities are next on the vaccination list, and it will likely be springtime before the general public can get vaccinated, national and state health leaders say.

"Our team has done their initial analysis, and we do feel that preliminarily that the success criteria have been met," FDA Commissioner Dr. Stephen Hahn told CNN Tuesday.

But the FDA has promised to listen to the advice of its Vaccines and Related Biological Products Advisory Committee, made up of independent vaccine experts, infectious disease specialists, industry representatives and a consumer representative -- 17 regular members and 13 temporary voting members. The meeting begins at 9 a.m. Thursday, and a committee vote could come in the afternoon.

The only real questions will be about whether the advisers recommend restrictions to the EUA -- perhaps leaving children off the lIst for now, for example. They'll also discuss how to conduct the post-EUA safety surveillance and whether to offer the shot to clinical trial volunteers who got placebo doses.

The US federal government is supporting the development of seven coronavirus vaccines -- four of them in large Phase 3 clinical trials. Two, made by Pfizer and Moderna, have now applied for EUAs.

All have been developed with unprecedented speed. The virus known as SARS-CoV-2 was only identified in January but just weeks after it was isolated, the Chinese government shared its genetic sequence and that was enough to get work started on vaccines.

Companies, academic researchers and the federal government had been working to develop so-called platforms that could be used to quickly turn around new vaccines. The first two to the finish line, Pfizer's and Moderna's, use a plug-and-play technology involving genetic material known as messenger RNA.

The approach had already been tried out against infectious diseases such as Zika and against cancer as well, so researchers were confident it was safe. It is also far faster than old-fashioned vaccine development techniques such as, for instance, influenza vaccines, which require samples of the actual virus which must be grown in specially chosen chicken eggs, purified and made into a vaccine -- an uncertain and slow process.

The mRNA vaccines need just a short stretch of genetic code and employ the human body itself to make its own vaccine. Tests in tens of thousands of volunteers starting in the summer showed it elicited an immune response and appeared to do so safely.

"The fact that we have so many cases of Covid-19 right now, it's so unfortunate for us as a country. The only upside to it is when you are doing a clinical trial with an endpoint that's a clinical infectious disease endpoint, it's been easy to get to those endpoints because there's just so many cases," Marks added.

"By August to October of this year it became clearer to us that the first vaccines that came through would indeed likely be granted emergency use authorization because of the incredibly pressing nature of this crisis."

Getting 'down and dirty' with vaccine data

Pfizer's vaccine does have what researchers have described as breathtaking efficacy. The company released its first data in media releases, but turned over tens of thousands of pages of it data to the FDA for closer study.

Drug companies usually write up summaries of their findings for regulators, but the FDA also asks for all of the primary source material -- the charts, even each volunteer's individual record. Marks said staffers have studied that.

"We are the ones that actually don't just look at the companies' tables. We actually get down and dirty and we look at the actual adverse event reports, the bad spelling errors that are made by physicians sometimes, et cetera," Marks said.

"They had 95% effectiveness across a wide range of individuals," he told the AMA.

The FDA published its summary and Pfizer's summary on the Vaccines and Related Biological Products Advisory Committee website Tuesday, and the 95% efficacy claims hold up.

"Vaccine efficacy against confirmed COVID-19 occurring at least 7 days after Dose 2 was 94.6%, with 9 and 169 cases in the BNT162b2 (the vaccine's experimental name) and placebo groups respectively," the FDA review document reads.

In other words, nine people who got the vaccine developed coronavirus infections with symptoms after the second shot, while 169 people who got placebo shots became infected.

The committee will run through all this data, but members will have read it all before Thursday's meeting, which will be livestreamed on YouTube, Twitter and the FDA's website.

How the meeting unfolds

Staff at the FDA's Office of Vaccines Research and Review will run down the FDA's study of Pfizer's data. Dr. Nancy Messonnier, who heads the US Centers for Disease Control and Prevention's National Center for Immunization and Respiratory Diseases, will review the CDC's plans for safety monitoring and other CDC officials will update on the pandemic itself and plans for distributing the vaccine.

Stanford University's Dr. Steven Goodman will talk about what it means for clinical trials going forward if a vaccine is approved. He'll address the question of asking people to forgo getting a vaccine known to be protective in order to test an unproven one.

Other possible questions are whether to include pregnant women and children in an EUA.

"At this point I would say, we may not have the data we need to actually be able to advise pregnant women, and we may need additional study," Hahn said.

And the National Vaccine Advisory Committee asked the FDA to leave children out of an EUA.

"The NVAC warns against issuing an Emergency Use Authorization (EUA) for COVID-19 vaccines in children, considering that children typically experience generally mild disease, except for multisystem inflammatory syndrome in children (MIS-C), a rare but serious condition that causes inflammation and various symptoms such as abdominal pain, vomiting, diarrhea, neck pain, rash, tiredness, and bloodshot eyes," the group said last week.

Pfizer will also present its data.

Then the committee votes whether to recommend authorization.

But that doesn't mean the vaccine is authorized immediately. The decision comes from the FDA, which typically follows the advisory committee's recommendation.

"One question that will come up is how fast will we see a vaccine authorized after that," FDA's Marks told the AMA.

"It will depend on the discussion at the advisory committee but we are hoping that within about a week afterwards we will see an authorization if everything goes well for each of those," Marks said.

It could come even sooner. In anticipation of an EUA, the CDC's Advisory Committee on Immunization Practices has scheduled emergency meetings for Friday and Sunday. This committee -- which is separate from FDA's advisory committee -- will recommend whether the CDC should offer the vaccine to the American public.

After the CDC accepts that recommendation, Pfizer shots may start to be administered.

The VRPBAC is scheduled to do it all over again next week, with a meeting December 17 to discuss Moderna's EUA application.