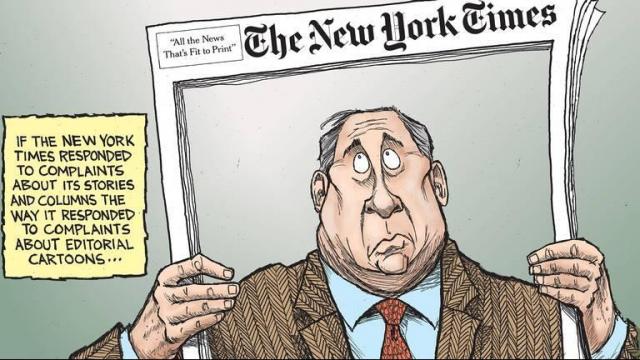 EDITOR'S NOTE: Kevin Siers is The Charlotte Observer’s cartoonist and a member of the editorial board. He received the 2014 Pulitzer Prize for Editorial Cartooning. This column was initially published by The Observer.

Editorial cartoonists across America and the world have consistently, uniformly and vigorously defended the ideal of a free press from the attacks of tyrants, dictators and twittering demagogues. But now cartoonists are united in their outrage as it has become apparent this week that The New York Times has indeed sadly failed. Monday, the Times announced it would no longer publish in-house editorial cartoons in its international editions, ending its regular publication of the work of internationally acclaimed cartoonist Patrick Chappatte.

This decision comes weeks after the Times was burned by its own editorial negligence in running a syndicated cartoon that was widely condemned as being anti-Semitic. Doubling down on this clumsiness in response to the resultant furor, the Times announced that it would no longer run syndicated editorial cartoons. Their decision now to not run in-house cartoons as well only adds to that ham-handedness, blaming the medium of cartoons for what resulted from its own lack of editorial oversight.

Former Observer editorial page editor Ed Williams (and my former boss) wrote back in 2000 about working with political cartoonists: “An editorial cartoonist who doesn’t have great ideas that an editor would refuse to publish should seek another line of work. The cartoonist’s job is to be provocative. The editor’s job is to decide what a family newspaper will publish. ... Our goal isn’t to avoid offending anybody. It’s to avoid offending anybody unintentionally.”

The Times has said that it may continue to publish types of “visual journalism, that express nuance, complexity and strong voice …”

The best editorial cartoons are not celebrated for their nuance. It is their clarity and pointedness, the sharpness of their satire, that make them such powerful vehicles for expressing opinion. There is no “on the other hand” in an editorial cartoon. This power, understandably, makes editors nervous, but to completely discontinue their use is letting anxiety slide into cowardice.