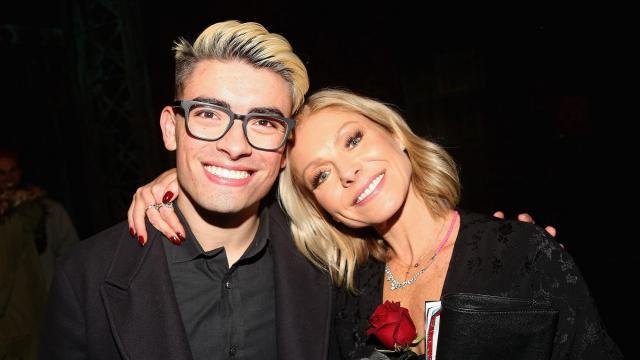 CNN — Kelly RIpa is defending a joke she made about her son on "Jimmy Kimmel Live!"

She appeared on the late night talk show Tuesday and talked about about how her son, Michael Consuelos, is living on his own in Brooklyn.

The 22-year-old, who attends New York University, is learning how to live on his own like many other young people, according to his mom.

"I think he loves the freedom," Ripa joked. "He hates paying his own rent, and he's chronically poor. I don't think he ever really experienced extreme poverty like now."

The talk show host said her son has been eagerly looking forward to the annual Halloween gift of $20 his grandparents usually send.

"Now that he's living on his own, he's called three times," Ripa said about her son inquiring as to whether the monetary gift has arrived.

Some folks didn't take kindly to what they saw as as a successful celeb making lightof poverty.

On Wednesday Ripa responded in the comments section of a photo of her and her son on her official Instagram page writing "Michael goes to college and is a senior and works full time.

"He is in his first non parent subsidized apt with roommates. I'm used to getting a lot of slack because people love to have fake outrage over something they didn't see. They only read a headline and wag their tired fingers. I didn't grow up privileged and neither did @instasuelos [her husband Mark's Conseuelos's Instagram handle]."

"We work and we expect our kids to as well," she added. "And the fact that a pack of fools want to b***h about that, i say let em."

Ripa also joked about how she and her husband, Mark Consuelos, can't seem to get rid of their kids.

The couple came home after lunch years ago from dropping Michael at NYU only to find him in the living room saying he thought he might stay the weekend, she said.

Daughter Lola, 18, started at NYU this fall and apparently got a little homesick, despite insisting her parents probably wouldn't see her for a while.

Ripa said she and her husband, who also have a 16-year-old son named Joaquin, were enjoying a jaunt to Long Island after leaving Lola at school when they were alerted that their daughter had returned.

"Sunday evening, our alarm trips," Ripa said. "My daughter's having a party on the roof of our house. She was gone 12 hours and came home."