Kelly Finds Himself in a Familiar Place in the Trump White House: Eyeing the Exits 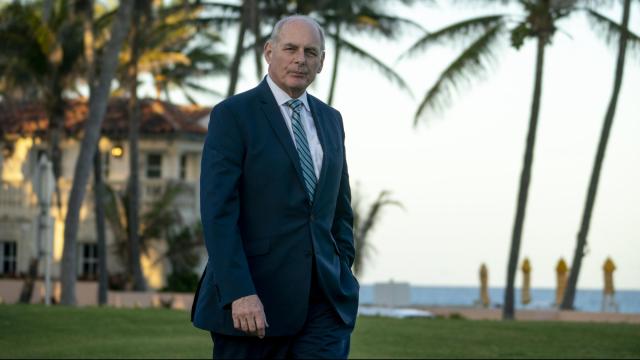 WASHINGTON — When President Donald Trump learned this week that his chief of staff, John F. Kelly, reportedly called him “an idiot” on several occasions, he expressed little in the way of frustration or anger, an uncharacteristically low-key response from someone with little tolerance for slights.

Attending a fundraising dinner on Monday, Trump told a confidant that he did not believe Kelly would say something like that, a point he made directly to Kelly in the Oval Office not long after the comment was reported. It was “fake news,” the president concluded, an assessment that he repeated in a pair of tweets.

Many current and former officials said Trump’s response was less a vote of confidence in his top adviser than a sign of indifference — a reflection of the kind of cold truce that exists between two powerful and mercurial men who have grown tired and irritated with each other, but are in no immediate rush to part ways.

The president has come to believe that Kelly is hiding things from him, in the view of people who work in the White House and insist on anonymity to describe private conversations. He has complained that Kelly has not been forthcoming about the pasts of some staff members, who either opposed him during the 2016 presidential primaries or had connections to the Bush family. And he has taken to venting about Kelly to an array of friends and supporters, while expressing confidence that recent successes — such as the continued strength of the economy and progress toward nuclear disarmament talks with North Korea — are proof that he is his own best adviser.

Kelly complains aloud about Trump, telling colleagues, “I don’t need this” after dressing-downs from the president.

While several current and former officials said they had not heard the chief of staff call his boss “an idiot,” as NBC News reported on Monday, many said that Kelly had given the impression over many months that he did not hold the president in high regard. He speaks as if he sees himself as the lone bulwark against potentially dangerous decisions by the commander in chief, they say. And whether he used the word or not, they added, the story itself could serve to accelerate his departure.

Yet Trump, always averse to confrontation, has continued to keep Kelly in his role, while increasingly steering around him on matters large and small. One person close to the White House said that it will be up to Kelly to end his tenure, since Trump knows how damaging it would be to dismiss a four-star Marine general.

The result is that Kelly now finds himself in the position where several others who have worked for Trump have landed: aware that their jobs have become close to untenable, looking for ways to cauterize the wounds to their reputations and knowing that it is only a matter of when — not if — they will have to leave. In an interview on Wednesday, Kelly’s deputy, Zachary D. Fuentes, defended his boss and insisted he was the victim of unfounded attacks.

“He’s been smeared,” Fuentes said of Kelly, adding, “I don’t understand why people want to see him go.”

As for the relationship between Kelly and Trump, he said: “They’re on great footing. Their relationship is as strong as ever.”

But the White House communications staff, which normally rushes to deny or sidestep rumors that Trump is angry with or on the brink of firing an underling, has been quiet. It allowed a statement that Kelly issued on Monday, and the protestations of his closest aide, to serve as the only substantial on-record comment in response to the NBC story.

“I spend more time with the president than anyone else, and we have an incredibly candid and strong relationship,” Kelly said in the statement, circulated to the White House press pool. “He always knows where I stand, and he and I both know this story is total BS.”

The next day, Sarah Huckabee Sanders, the press secretary, tried to put the best face on the relationship, telling reporters that both Trump and Kelly were “very happy with his position that he currently holds.”

But Chris Whipple, the author of “The Gatekeepers,” a history of White House chiefs of staff, has a different view of the relationship. “It’s like a really bad marriage, but maybe for now both people have decided they’re just going to try to muddle through,” he said. “Trump is just tired of having a chief of staff, and has this delusion that he would somehow be more effective unchained.”

Whipple described Kelly as suffering from what he called the “Don Regan syndrome,” a reference to Ronald Reagan’s ill-fated chief of staff. Like Kelly, Regan would often say things that revealed a disdain for his boss, once famously comparing his job to that of a shovel brigade whose task was to walk behind a herd of elephants cleaning up their mess.

“He’s arrogant, he’s been imperious and he’s politically out of his depth,” Whipple said of Kelly. “That’s all coming back to bite him now.”

Some officials said the NBC story appeared to be part of a calculated effort by Kelly’s detractors to damage him in Trump’s eyes, perhaps to prod the president to take the step he has so far resisted of firing his chief of staff. Kelly’s hold on the White House staff has certainly weakened, tarnishing his reputation and overshadowing his efforts to bring order and discipline to the West Wing.

The scandal surrounding the departure in February of Rob Porter, the staff secretary who resigned under pressure amid allegations of spousal abuse, left a lingering bitter taste among aides, some of whom felt that Kelly had botched his response and been dishonest about his own role in the episode. Among those who came away angry with Kelly were Jared Kushner — whose high-level security access he revoked as part of tightened security clearance procedures in the scandal’s aftermath — and Ivanka Trump.

More recently, he has left some aides with unclear job descriptions in place while declining to fill key roles. He has targeted some people who were close to Trump during the campaign as potential problems, and tried to limit their influence. That has included people within the West Wing as well as those on Trump’s ever-present evening phone call list, such as Corey Lewandowski, the first 2016 campaign manager who was fired before the convention.

Lewandowski and David Bossie, the deputy campaign manager, both traveled with Trump to Michigan on Saturday. And the looming midterm elections — for which Kelly has no instinctive feel — provide Trump with added incentive to listen to other voices.

Kelly’s insistence on an identifiable chain of command in the White House — one of the first things he tried to establish when taking the job last summer — has given way to the creation of new fiefs.

Larry Kudlow, Trump’s new director of the National Economic Council, has a direct line to the president, as does John R. Bolton, his newly installed national security adviser, who was not Kelly’s preferred candidate for the role. Bolton has been seeking to build his own empire, hiring staff members who may have been considered problematic before.

Kelly, for his part, is sanguine about how little control he has over how the president chooses to spend his time. At a breakfast event last week for Sen. Tom Cotton, R-Ark., Kelly marveled that Trump had spent a long time the day before on the phone with Bill Belichick, the New England Patriots coach, talking about the status of Tom Brady, the star quarterback, according to two people familiar with his remarks, one of whom was present.

“It was, to begin with, the most dysfunctional White House in modern history, and now it’s worse,” Whipple said. “Without an empowered White House chief of staff, you can’t execute policy.”