NEW YORK (CNNMoney) — Kellogg's says it's changing the art on its Corn Pops cereal box after a consumer complained it was racist.

"Kellogg is committed to diversity & inclusion," tweeted the Kellogg's company on Wednesday. "We did not intend to offend -- we apologize. The artwork is updated & will be in stores soon."

The company's statement came after an author named Saladin Ahmed tweeted an image of the Corn Pops box, which depicts dozens of yellow-hued Corn Pop characters, except for the lone brown Corn Pop in a blue uniform pushing a floor buffer.

"hey @KelloggsUS why is literally the only brown corn pop on the whole cereal box the janitor? This is teaching kids racism," tweeted Ahmed.

hey @KelloggsUS why is literally the only brown corn pop on the whole cereal box the janitor? this is teaching kids racism. pic.twitter.com/Nh7M7IFawW

Kellogg's reply came about five hours after Ahmed's original tweet that morning, presumably during breakfast. Ahmed replied that he appreciated the "rapid response."

Since then, many of his tweets have either been pitching his upcoming comic book "Abbott," which he describes as a supernatural crime thriller set in his home town of Detroit, or complaining about getting "hate retweeted" by racists.

Ahmed has published several science fiction novels, including "Throne of the Crescent Moon" in 2012, which was nominated for Hugo and Nebula Awards. 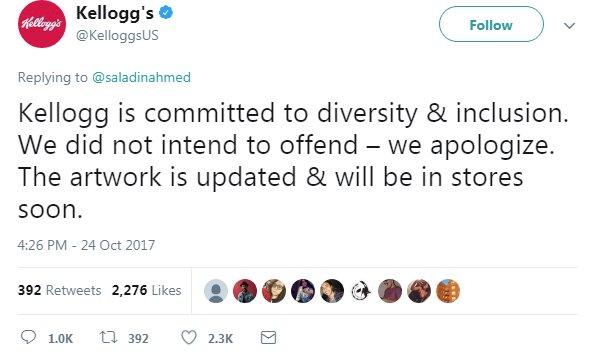 A string of companies have come under scrutiny for racially insensitive advertising, like a Dove ad earlier this month which prompted the company to admit it "missed the mark."

But Cheerios received attention of a different kind when it featured a mixed race couple and child in a commercial in 2013, which won praise from some consumers, but backlash from racists.