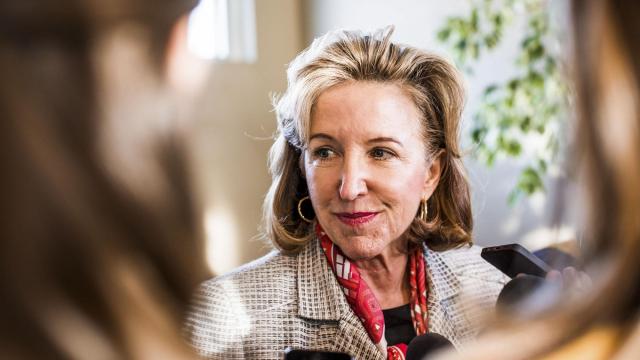 Kay Hagan, a former Democratic senator from North Carolina who served one term in Washington after defeating Elizabeth Dole, a Republican, in 2008, died Monday at her home in Greensboro, North Carolina. She was 66.

Her husband, Charles T. Hagan III, said she died of complications of a type of encephalitis, or brain inflammation, caused by the rare Powassan virus. The virus is transmitted to humans by ticks, and Charles Hagan said he believed that she had picked up the tick while hiking in 2016.

Kay Hagan defeated Dole in the first general election in North Carolina in which the two major-party candidates were both women. When she ran for reelection in 2014, she was defeated by Thom Tillis, a Republican. After her loss, she became a resident fellow at the Havard Kennedy School Institute of Politics.

Hagan served in the North Carolina Senate from 1999 to 2009 before running for the U.S. Senate. That race was marked by a Dole campaign ad that accused Hagan of not believing in God and taking “godless” money.

Hagan, a former Sunday school teacher, called the ad “fabricated and pathetic” and sued the Dole camp for defamation. After she won the election — 53% to 44% — she dropped the suit.

The win in North Carolina helped the Democrats regain control of the Senate at the time.

But in 2014, she lost the seat to Tillis, who was speaker of the state House, by 1.7 percentage points.

Spending in the race topped $100 million, making it the most expensive Senate race at the time.

At Harvard, Hagan studied the influence of money in politics. “I worry how we are going to get good people to run for office if you have to spend so much time raising money,” she said in a 2015 interview with The Harvard Political Review.

“In any competitive race,” she added, “you’re doing fundraisers at breakfast, at dinner, and it’s just so much time that should be spent on policy, on drafting legislation, on engaging with constituents back home.”

Janet Kay Ruthven was born on May 26, 1953, in Shelby, North Carolina, to Jeanette (Chiles) Ruthven, a homemaker, and Joe P. Ruthven, who ran a tire business in Shelby and later in Lakeland, Florida, where he developed a warehousing business and went into real estate.

She attended Florida State University, where she majored in ballet and American studies and graduated in 1975. She served as in intern in the Capitol Hill office of her uncle, Lawton Chiles, a U.S. senator from Florida and later the governor there. Her job was operating the senators-only elevator.

She met Charles Hagan at Wake Forest University School of Law. They married in 1977 and she graduated in 1978. They lived in Greensboro, where he worked in his father’s law firm and she worked for North Carolina National Bank — now Bank of America — in the trust department.

The virus that proved fatal to Hagan, Powassan (pronounced po-WAH-sun), is named after a town in Ontario, where it killed a boy in 1958. Only six cases were reported in the United States in 2015, according to the federal Centers for Disease Control and Prevention.

But with the tick population exploding, and tick-borne diseases increasing, especially in the Northeast and the Great Lakes region, the number of Powassan cases rose to 21 in 2016 and 33 in 2017. Still, this is a tiny proportion of diseases borne by ticks. The CDC said that about 10% of people with a severe case of the virus die and 50% experience long-term health consequences.

Charles Hagan said his family surmised that Kay Hagan picked up a tick when they were hiking in the Blue Ridge Mountains in Virginia over Thanksgiving in 2016. They had walked through the woods at Peaks of Otter and had a picnic on the grass, where she was probably bitten, he said.

By early December, one side of her face was drooping, and he thought she had had a stroke, Charles Hagan said. She received a diagnosis of encephalitis, but because the Powassan virus is seen so rarely, it took doctors more than two months to identify it.

The disease, for which there is no known treatment or vaccine, affected her ability to control her muscles, arms and legs and hampered her speech. She had been using a wheelchair since before the diagnosis.

Since contracting the illness, Hagan largely stayed out of the public eye. She made a rare appearance in June, when she attended the groundbreaking ceremony for an air traffic control tower at Piedmont Triad International Airport in Greensboro, for which she had helped procure federal dollars. She did not speak at the ceremony.

“Kay’s ability to speak is limited, but her comprehension is very good,” Charles Hagan told reporters at the time.

He said Monday that she had died unexpectedly. She had been doing well, he said, and had an enjoyable weekend, attending a dinner Friday and a wedding Saturday.